Harry Potter and the Half-Blood Prince—the sixth film based on J.K Rowling's beloved books—finally makes its worldwide debut on July 15, but there's no rest for the weary back in England, where the epic, two-part conclusion, Harry Potter and the Deathly Hallows, is in its fifth month of production.

The next movies will split Rowling's seventh and final book, Harry Potter and the Deathly Hallows, with part one debuting on Nov. 19, 2010, and part two bowing July 15, 2011.

Heyman said in the press conference that the two films will be very different, although they are two halves of a whole story. Part one is essentially an edgy, verite "road movie" that's a strong departure from the more comedic Half-Blood Prince, he said. "We are really enjoying it, actually," he said. "It's quite intense and very raw. We are way away from Hogwarts. It's a bit like three refugees being pursued across the landscape by these terrible Death Eaters. It feels very different. Actually, it's very hard coming back to [talk about] Half-Blood Prince, as we finished it a year ago."

Watson, who plays Hermione Granger, agreed with Heyman, adding that she's amazed at how different an experience shooting the Deathly Hallows installments has been.

"It feels totally different," Watson said in a separate cast press conference. "I feel like I am on a different film. The other films had a structure where it's like we come into the Great Hall, and then it's the opening talk, and ... that is just gone. It's not very often in the middle of filming you stop yourself and go, 'This is going to be awesome.' And I've done that on a number of occasions. We just [shot] this amazing scene in the forest, where we are being chased by the Snatchers. I've never done anything like it; nothing even close. I have never done any serious stunts or real action, and this is so exciting and dynamic. And all of us are now done with school, so we are totally focused on this finale at Hogwarts. I hope it's going to be brilliant."

As for part two, Yates said it's basically a "big opera." "It's a great big epic with huge battles," he said. "And it's oddly moving, because it concludes the whole saga."

Of course, the team wasn't spilling everything about the films, especially when asked where screenwriter Steve Kloves has split the book: where part one ends and part two begins. Producer Heyman suddenly got very tight-lipped and refused to divulge the specifics. "I could [tell you], but I'm not going to," he said.

"It's been an interesting process, because when we began all of us didn't want to make two films," Heyman added. "Why do it now? And it wasn't told to us that we had to do it; rather, it was an organic process of working on it and Steve working on it. The films took a fundamental turn when Steve, working with Alfonso Cuarón [director of Harry Potter and the Prisoner of Azkaban] made the decision to tell the story from Harry Potter's point of view, as opposed to translating the books to film. From that point, there were necessary omissions along the way. Something that we love—like SPEW [Society for the Promotion of Elfish Welfare], which is Hermione's interest in the house elves—we loved that, but it is omitted because it wasn't part of Harry's story. It allowed us to create a cinematic structure for the films rather than literally translating the books."

Heyman continued: "The seventh book is a long book, but it is a book in which there is almost nothing that isn't related to Harry and almost nothing that you can cut out. So Steve was working away in the vacuum of his house, struggling, in some ways, to figure out what to cut. Together, all of us made the decision ... to make two films. There is so much material in the seventh book, so making two films was the very best thing we could have done for the book to adapt it in the right way." 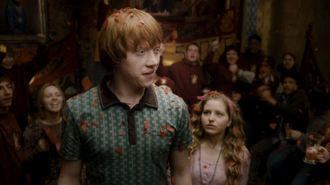 Heyman said they have their break point worked out, but it could change in the edit. "Because we are shooting both films as one, shooting them together, we'll see what happens ultimately," he said. "It's written in a very specific way, and that, I'm sure, is where we'll end up, but I don't want to say now and then all of a sudden we go, 'Hmmm?'"

The filmmakers also declined to discuss how the final film will depict the epilogue to Deathly Hallows—spoilers ahead if you haven't read the book!—which shows Harry and his friends 19 years in the future, as they send off their children to Hogwarts.

"It's an absolutely beautiful part of the book," Yates said passionately. "One of the most unique things of this franchise is the fact that we've grown up with these characters. I think it's what makes it special for the audience. So we will be delivering that at the end of part two, but we are looking at various options of how we do it. We still haven't quite figured it out yet."

Asked if the Academy Award-winning technology used for The Curious Case of Benjamin Button might be utilized in some way, Heyman said it was possible but unlikely at this juncture. "Benjamin Button was making him look younger, and we are taking people who are 20 years old and making them look like they are in their late 30s. We may use some of the techniques of Button, but we are still in an exploratory stage. We will do everything we can, but it will be Dan, Rupert and Emma in those parts, not some other actors."