Harry Potter clashes with Titans in Percy Jackson. Sort of

With the last two films in the ginormous Harry Potter franchise wrapping up production soon, industry experts and audiences have taken to wondering what's going to be the next big kid-friendly book-to-film franchise when Harry's all but a Hogwarts memory.

If 20th Century Fox has any say, it's going to be a kid named Percy Jackson.

WATCH: How Gremlins changed the world and influenced movies for years to come
Kurt Russell is your new favorite Santa in the first teaser for Netflix's The Christmas Chronicles

Based on Rick Riordan's best-selling fantasy series, Percy Jackson and the Olympians: The Lightning Thief is the first in a potential series of five big-screen adventures revolving around an average 16-year-old (played by Logan Lerman) who discovers that he's actually a demigod, the son of Greek water god Poseidon (Kevin McKidd). Think Clash of the Titans meets Sorcerer's Stone.

Like Harry in the Potter books, Jackson gains access to a guarded, secret world that exists alongside human reality, one where monsters, deities and mythical beasts hide themselves in plain sight. After being accused of stealing Zeus' (Sean Bean) all-powerful lightning bolt, Jackson bands together with fellow teen demigods Annabeth Chase (Alexandra Daddario) and the Satyr Grover Underwood (Brandon T. Jackson) in pursuit of the real thief.

But launching a potential new mega-franchise is easier said than done (we're looking at you, Narnia), so Jackson is being guided by director Chris Columbus, who started the whole Hogwarts Express in 2001 with Harry Potter and the Sorcerer's Stone.

The question is: Can the inconsistent Columbus do it again with Percy? 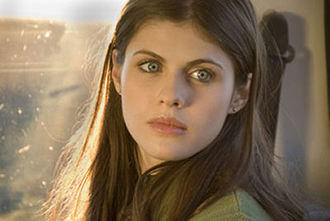 Star Logan Lerman (Percy) says yes, but defends his film by saying the Olympians are very different from Harry and his pals.

Abel added: "Chris Columbus isn't a director that's going to repeat himself and do the same things he did in the previous two [Potter] films. He's going to change it up. He throws kids into extraordinary situations, but the films themselves are each classic and separate."

For one thing, Columbus and screenwriter Craig Titley worked hard to "cut off as many similarities between Percy Jackson and Harry Potter," Abel said. And that meant not being a slave to the details of Riordan's original book. 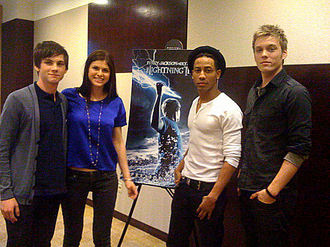 "They are different mediums," Logan explained. "I think fans accept that, and they can see it as two different things. So there are a million things that are different. Annabeth isn't blond, we're not 12 years old, and [Grover] isn't black [in the books]."

Jackson good-naturedly rolled his eyes at that. "People always say 'Grover wasn't black!' But who knows? Chris Columbus has a vision, and some things have to compromise, because some things don't translate from books to movies, and we know that. I think Chris understands you have to be entertained and you have to sell a movie."

And that means some kids who worship the Percy Jackson books are going to be surprised by some changes, a fact that Daddario knows won't sit well with everyone.

"I think that kids really are attached to these books, so the details are very, very important to them, because they picture in their minds these characters," she said with empathy. "It's sometimes hard for them to see it in a different way than they imagined it, but I think the essence of the characters and the story is intact."

Percy Jackson and the Olympians: The Lightning Thief opens Feb. 12.