Has V lived up to the hype?

They came. They put a pretty Visitor on the bottom of a big-ass spaceship hovering over New York City. They conquered the ratings ...

They are ABC, and the show is V, the biggest new hit the network has seen in a long time.

Yes, V lost 3 million viewers or so between week one and week two, but things are still looking bright for the alien-invasion drama, which has garnered its share of raves and pans. (The third of four initial episodes airs tonight at 8 ET/PT.)

Entertainment Weekly's Ken Tucker wrote, "As an adventure series bristling with ideas, it's V+. Or as we grade 'em on Earth: B+." However, Salon's Heather Havrilesky felt, "Suddenly this might as well be Fringe or Warehouse 13 or The X-Files or Eureka or any one of hundreds of shows that involve FBI agents and international espionage and terrorist thugs and secret plots to take over the universe. Come on, now. Isn't there a new way to handle the alien invasion story?"

So the real question now that we've seen a couple episodes is, "Is V good?"

Let's dig into the good, the bad and the alien of it all and dig underneath the surface to see if beautiful really is only skin deep. We think V is actually very entertaining, despite the fact that it doesn't quite live up to the original or the hype of its potential. 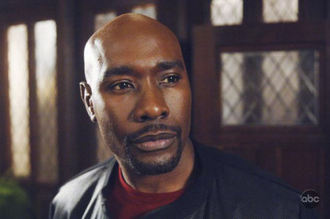 Morris Chestnut, who plays Ryan Nichols, because he's hot. OK, the truth is that all the regulars are hot on this show except the old V-loving priest, Father Travis (Scott Hylands), and he'd probably be hot if he were younger.

Erica Evans (Elizabeth Mitchell) is warm and real as an FBI mom, and she's a nice contrast to the beautifully cold and slightly alien (though still smokin' hot) Anna (Morena Baccarin).

We agree with PioneerLocal.com's Jennifer Thomas, who wrote, "When I saw some of the first clips for ABC's V, especially the one of Morena Baccarin's giant face broadcast across the New York skyline, I got worried. That looked kind of cheesy. But V is good, actually very good."

The way Anna forces reporter Chad Decker (don't you just hate him a little at first?) to do her bidding. We liked it even better in the second episode when he turns the tables on her and forces her to accept the fact that he's not going to be her little pet human.

The floating alien ball that shoots out projectiles to kill some of the rebels during the rebel meeting. Cool stuff.

Loved what viewer matwamango considered the most shocking moment of the pilot, "Ryan's scaly reveal, but he was one of the good Vs." Which makes him being an alien kind of OK. 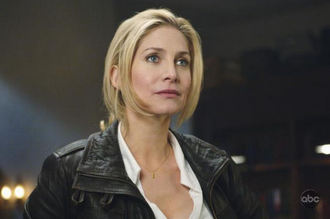 The idea that there are spaceships hovering over her head and Erica still wants to hunt down a terrorist cell.

The incredibly brief but gorgeous view of the V city inside the enormous ship. We'd like to see more of it.

While it wasn't a huge surprise that Erica's partner, Dale, who is played by Firefly's Alan Tudyk is an alien bad guy, we sort of love it anyway. Especially since we knew he wasn't a regular on the show. The good news, it's looking like he's definitely going to be back, and he's pissed.

You've got to love the idea of literal "universal healthcare." That one made us laugh. (A political comment? See below.) 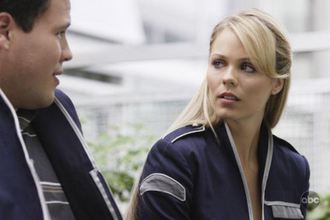 Lisa's (Smallville blondie Laura Vandervoort) look of revulsion when Tyler punched out someone saying nasty things about the Vs. So much for being a Peace Ambassador, Tyler. Maybe you should listen to your mother and stay away from the Vs. Like that's going to happen.

The fact that alien traitor Ryan, who's wearing the cute-guy human suit, and his traitor buds don't really know what the Vs have in store for the humans. As Ryan's traitor friend says, "Whatever they're going to do to the humans, it's nothing compared to what they'll do to traitors like me and you."

Anna's blinky eyes. No, no other Vs seem to do it, but it's kind of a fun bit.

And here's what we didn't like so much from the first two episodes:

Yes, we like Jack and Erica. However, does anybody really think these two could lead a revolution? Not so much.

One of the big complaints, which we agree with, from a comment by viewer warren887: "I just have to say, I don't like the way the graffiti symbol of 'V' has been changed to 'V for visitors' instead of 'V for victory!' That was a very important scene in the original series, when the old Jewish man explained the 'V for victory,' to the kids. I thought it paid great respect to previous generations. This 'V for visitors' is disrespectful to the original V and the idea behind the title of the show!" If "V for Victory" isn't somehow incorporated into the show, we'll be very disappointed too, warren887.

Teen Tyler is annoying! Yes, actor Logan Huffman is as pretty as Laura Vandervoort, but don't you just want Erica to slap him? We know that teenage boys don't necessarily think with their brains, but really, Erica, slap him. Come on! Give him a good smack for us.

Why do shows too often kill off the most entertaining character in the pilot? Or, in this case, make Dale a traitor. We liked Erica and Dale better than Erica and Jack. Yes, we liked the twist, but were more entertained with him as her partner than we will be with him being her enemy. (There are signs he will return, however.)

Viewers reading silliness into V's meaning, such as deciding that the series is an allegory that demonizes Obama's promise of hope and change. Really, folks, unless they were criticizing Obama in 1983, when he was 22 years old, the prez really wasn't in the picture when the story was developed about a charismatic leader of an alien culture who came to save us with promises of hope and universal healthcare. In fact, in the original, alien commander John offers to help the human race solve its "environmental, agricultural and health dilemmas." That sounds like universal healthcare to us. We doubt writer Kenneth Johnson (who wrote the original V) knew who Obama was, since he was graduating from Columbia University about then. Not everything from the new V is lifted from the original, but that idea (of embracing those who promise to save us) pretty much remains intact.

HitFix.com's Daniel Fienberg writes that while he likes the series so far, "if the original V hadn't been so clear in its message, I wouldn't feel that the new V had any responsibility to follow suit. But a V without subtext is just an alien drama parasitically feeding off the V brand name." In other words, it needs to be better than the original.

Nobody's eaten a guinea pig yet.

How sad that ABC had so little faith in V before it aired that they decided to run only four episodes, with the remainder of the episodes airing next year. Any bets on whether they'll change their minds?

And what we're looking most forward to:

Someone eating a guinea pig.

Morris Chestnut having lots of excuses to take his shirt off.

Jyarter said, "From this point on most will play the 'Who's a V? game' as they are watching the show." That would include us.

Erica and Father Jack getting tough enough to be believable leaders of this revolution.

Discovering who the Vs are going to pick on. In the original it was the scientists. They need some group to persecute. But with no scientist characters, who's it gonna be?

While we like Anna and her possibilities, tharkhold said, "Did anyone ever notice all the hot chicks in sci fi are almost always vampires, werewolves, or lizards in disguise? It is enough to make you distrustful of anything that doesn't have 27 tentacles and is dripping acidic ooze." With that image implanted in our brains we can't wait to see Anna's 27 tentacles and acidic ooze. Or at least her eating a guinea pig.

V coming into its own and stepping away from its source material. We liked the original, even though it looks pretty darn dated these days. But if V is going to work and continue to draw us to our TV sets each week, it needs to do so on its own merits by being scary and thrilling and entertaining and picking up the action and characterization. After only two episodes they've done a pretty good job so far, but we do expect more if we're going to want to come back in a few months for more V.

What do you think? Has V lived up to the hype?