The final two episodes of Syfy's Haven will premiere tonight, but whatever you think you know about the season so far, think again, said actors Emily Rose, Eric Balfour and Adam Copeland. The "comedic sort of episode," "Reunion," will air at 8 p.m. ET, immediately followed by the "mind-blowing" finale, "Thanks for the Memories," at 9 p.m.

"I think the thing that was crazy for me about this [first] episode tonight was I was a little perplexed, to be honest with you, that it was a more comedic sort of episode," said Rose, who plays Audrey Parker. "We're coming into this big, huge, massive cliffhanger and we're going to laugh? And I just remember being very pleasantly surprised and going, okay, 'It's kind of like the calm before the storm,' you know? It's good to have some humor before it all hits the fan."

"It was also nice to see you and Nathan dance a little bit, too," said Balfour, who plays Duke. "That was kind of cool."

"Oh, and we danced to the most amazing song. I was laughing my butt off. It's hilarious. I was like, 'Really? We're playing this right now? This is so high school reunion.' This is amazing," said Rose.

As for the big finale, yes, there will be a cliffhanger, the actors said during a conference call with journalists.

"There are some crazy things going to happen at the end of this season," said Balfour.

"There's one really amazing scene for me as a character in the show, and then also, just for me, Adam, sitting there watching this and seeing all of my friends, there's one moment where you see everyone and all on one spot," said Copeland, aka the Edge, who plays Dwight, Haven's cleaner.

"And it's very, very cool to see that, because, well, for me personally, as the character who fights, interactive one-on-one or in groups of twos or threes but never all of that. So it was just seeing the scope of kind of the landscape that they painted, along with the landscape of the scene, the physical attributes of the scene, it's pretty epic, is the right word," he said. 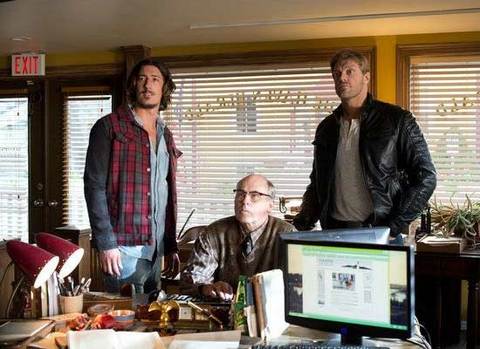 Well, jokester Balfour is probably pulling our leg. However, during one of his few serious moments, he did talk about whether Duke will kill a Troubled person to stop their curse in the finale. "This week's episode, Duke is going to have his own problems to deal with, and he's going through a lot this week and going through many, many changes. Duke becomes a man this week, oddly enough, in a weird way, if you get my meaning," he said.

What we will see is more about the barn, the one Audrey's supposed to enter willingly that will make her vanish for decades, along with Haven's Troubles.

"It's been really fascinating, because this barn has grown some prominence as the season has gone along. I think that's probably the exciting thing about the last episode: how close we get to unearthing this mythical building and what it is," said Rose.

"I still don't even quite understand everything that it is. But it's been really neat. You know, it's one of those things you sort of dance around for a long time in each of the seasons, and then you finally go, 'Oh, this is cool. We're actually going to go there. This is really interesting.' So it's been really fun for me. And it's been fun that it feels, in a way, like a portal in some manner of the word, kind of like the mystery of The Lion, the Witch and the Wardrobe growing up. It's like this really interesting thing. And I'll be really fascinated to find out more about it, hopefully, as the seasons go on."

It has been a very busy season with lots of mysteries. However, we did learn more about Audrey's last lives as Lucy and Sarah. We learned Dwight has a connection with the Guard, we learned the Guard wants Audrey to go into the barn to save the Troubled people of Haven, and we learned when Duke kills a Troubled person, their Troubled curse is not passed on to others. However, that pesky skinwalking Bolt Gun Killer is still on the loose and wearing people we've gotten to know. What can we expect when it comes to him/her?

"In reference to what Emily was just saying about the finale, I just want to put it out there: mind-blowing, like literally," said Balfour. "The season finale of this season is so epic and kick-ass. And the cliffhanger ..."

But will we finally, after three seasons, get to meet the Colorado Kid?

"I don't think it would be very much fun to say yes or no, because we do know the answer, but either way, it will be a disappointment if we reveal if it's no, which it could be, or if it's yes. Because if you say no, it makes sense, because obviously we want to keep that mystery going, because the show's going to continue. We know we've been picked up for a fourth season," said Balfour.

"At the same time, yes, we do want to start to resolve some of these things and pay off some of the stuff and so you want to say yes. What I really want to say is supercalifragilisticexpialidocious," he joked.

"I just really enjoy the film Chitty Chitty Bang Bang. I think it's a really good movie, which has nothing to do with supercalifragilisticexpialidocious, because that was Mary Poppins but, you know, there it is," he added.

Okay, Balfour. What can you tell us?

"There is so much more to be revealed in the last two episodes of the season that are huge," said Balfour. "And I can't say enough about this season's cliffhanger. I mean, it's cruel, in some ways, what we're going to do to the fans. And we're doing it because we love you. I just want to make that clear. We're doing it out of love, and it's for your own personal growth and evolution."

Here's a look at tonight's finale:

6 ways the new show Haven gives you Stephen King goodness
Get ready for Evil Audrey: Everything we know about season five of Syfy's Haven

Are you ready to meet the Colorado Kid?