There's been big stuff brewing on Syfy's Haven, and life's about to get even more challenging for the show's characters on the season-two cliffhanging finale, said actor Lucas Bryant. While the Canadian actor promises we'll learn some of the character's secrets, don't expect to find out too much.

"I mean, you get some great answers, learn some crazy stuff. And we'll see if people think that it's as rug-pulling as the season-one finale was. But ... there are some definite cliffhangers. I mean, it would be nice to say that everything is revealed and they figure out how to end the Troubles and everyone lives happily ever after. But we want to do another 10 seasons," said Bryant.

Last week's episode, "Business As Usual," featured a big kiss between Nathan and Audrey, along with teasers about Audrey and Duke's pasts.

"I think a lot of fans got what they wanted this past episode—I mean, a taste of it, anyway. And then maybe some were horrified, but I hope there's not too many of those," joked Bryant. "I'm sorry to say I don't see [Audrey and Nathan's romance] progressing as easily as one might hope and realize. I mean there's definitely going to be some roadblocks and speed bumps; I can't and won't tell you exactly what they are, and I don't know the half of them. But yes, I think that puts us on a trajectory that has potential to be lovely, but will probably inevitably be very difficult and potentially dangerous."

On tonight's finale, "Sins of the Fathers," ghosts of the past return to reveal shocking truths about Audrey, Nathan and Duke's future. Battlestar Galactica's Tahmoh Penikett guest-stars, along with Nicholas Campbell, who played Nathan's father, the Chief, in season one.

When last we saw him, the Chief turned out to be Troubled himself and blew up. So we're guessing he might end up being one of the ghosts of the past.

"We get to see the Chief, or some version thereof, in the second-season finale. And thank God, I mean, I was so excited for that. I love Nick, I think he's a fantastic actor and person and a great character. So I'm really happy that he's back, for this episode at least. And hopefully there's potential for more. ... I mean, the conversation that Nathan and the Chief have in the season finale is revealing," said Bryant. 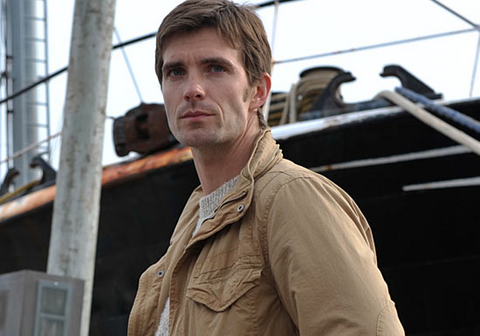 "But, how do I say this ... it also doesn't reveal everything that it could. So I believe there's going to be large ramifications from it, which we won't necessarily come to understand until, God willing, season three, four or five. So it's a big moment, obviously, for the character, and also for the show. But saying this, I wonder if people—when they watch the show—will be like, 'What the hell was Lucas talking about? Because I didn't see that.' Let me just say that there's more to their interaction than we necessarily experience now. Boy, that's a bit vague, isn't it?"

The other significant relationship for Nathan this season has been with Duke. And we can expect some developments between the two, said Bryant.

"It is very complicated, and you're going to understand a bit more about why in the season finale. And I'm really happy about that. I mean, we know something about their complicated history, but there's a really great reveal in the season finale that doesn't explain fully their relationship, but gives a lot more insight into why it is what it is. ... Beginning to understand more why they are the way they are, which we do in the finale, is, I think, going to add a lot more weight to that relationship."

As far as playing Nathan, the reserved cop who's a man of few words with a dry wit, Bryant said, "One of the most fun and challenging things to do is explore how he progresses as a man when he has so many socially awkward issues. On the one hand, he's totally comfortable in his role and relationships in the town. People, I think, have generally a good feeling about him. And he's a good guy, but he's not terribly excellent at expressing himself. ... And so any times that Nathan's put in an awkward situation or often with Duke or with women or with his emotions, that he is a real pleasure and challenge to work through.

"Then, at the same time ... he does have a great and sort of strange sense of humor, and more quirky and weird personality than we get to see all the time. Like his terrible dancing ability, which that was totally ridiculous to shoot and even more awkward to watch, but that was a lot of fun. That might also be my least favorite of Nathan's characteristics, is his terrible dancing," he said.

Bryant admits that Nathan's reserved nature is even too reserved for him upon occasion. "Sometimes I just want him to pull the trigger. Not literally, but it's like, man, do something. Tell her, do it, kiss her, step forward, you know, punch him, whatever. I mean, he's still fighting [himself] in self-imposed handcuffs."

Here's a preview to tonight's finale:

Has Haven been worthy this season?