Here are some tantalizing details for Doctor Who's S7 Dalek opener

We're weeks away from the eagerly anticipated Doctor Who season-seven premiere, and a few tantalizing details have emerged from the Time Vortex about that first, Dalek-filled episode. *SPOILERS AHEAD*

The spoilery report below was posted by our colleagues over at Doctor Who TV.

Why Karen Gillan fondled Matt Smith during their final Who scene
Doctor Who's Rory talks season 7, the Daleks and why he's leaving

The pre-title sequence of the opener will reportedly see both Amy and Rory kidnapped by a pair of mysterious characters, believed to be working for the Daleks.

One of them, Cassandra (played by Naomi Ryan), is sent to get Amy. Amy is now a full-time model and is doing a photoshoot when she is taken.

Another person, who is posing as a London bus driver, teleports Rory away when he gets on. Rory is on his way to the solicitor to file for divorce at the time.

Cassandra and the bus driver both appear to be human but transform into something else just before they take The Ponds... 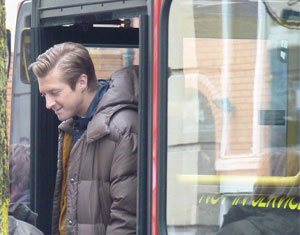 While we've already heard rumblings about the marital woes (*cough* divorce *cough*) plaguing our beloved Ponds, Amy (Karen Gillan) and Rory (Arthur Darville), and Amy's modeling career was already hinted at (Amy posed as a model for her perfume advertisement, called Petrichor, in last season's episode "Closing Time"), all the other info is quite new to us and sounds both exciting and mysterious.

So what do you think? Any theories as to who may be working with the Daleks? Do you believe they'll be a brand-new Steven Moffat creation or an old enemy?

(via Doctor Who TV)