Here's when you can catch future episodes of BSG: Blood & Chrome

With the first few episodes of Battlestar Galactica: Blood & Chrome now in the wild, Machinima Prime has announced the release schedule for the remaining episodes in the BSG prequel web series. Want to know what's coming next?

Instead of breaking episodes up one at a time, Machinima has announced they'll debut two new webisodes each Friday, with the final two installments set to go live Dec. 7.

If that's too hard to remember, you can subscribe on YouTube, or just grab this handy graphic that breaks down the schedule: 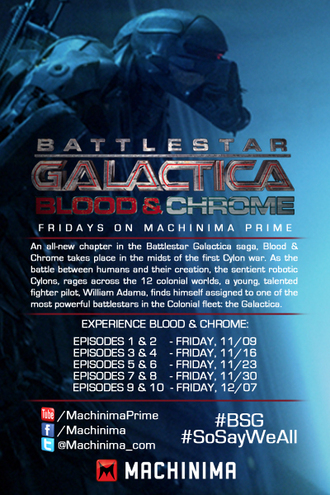 If you've been trapped in a Cylon prison the past few weeks, here's the synopsis for the series:

This highly anticipated chapter in the Battlestar Galactica saga takes place in the midst of the first Cylon war. As the battle between humans and their creation, the sentient robotic Cylons, rages across the 12 colonial worlds, gifted fighter pilot, William Adama (Luke Pasqualino, The Borgias), finds himself assigned to one of the most powerful battlestars in the Colonial fleet: the Galactica. Full of ambition and hungry for action, Adama quickly finds himself at odds with his co-pilot, the battle-weary officer Coker (Ben Cotton, Alcatraz). With only 47 days left in his tour of duty, Coker desires an end to battle as much as Adama craves its onset. Lili Bordán (Silent Witness) also stars.

What do you think? Has Blood & Chrome become appointment viewing for you?