One of the most anticipated titles of the upcoming second half of Doctor Who's seventh season is Journey to the Centre of the TARDIS, and no one may be more excited for that episode than Steven Moffat himself. His reasoning, though, may surprise you.

In the latest issue of Doctor Who Magazine, the writer for the TARDIS episode, Stephen Thompson, explained the reasons Moffat gave for having him pen this particular episode.

"He admits to being haunted by The Invasion of Time — the story from 1978 set on board the TARDIS, where the sets were cobbled together at the last minute. Unfortunately a TV strike meant that studio sets were not built, and as a result our only glimpse of the TARDIS interior has been a disused hospital in Surrey with bin-bags stuck to the windows."

Torchwood is essential queer television masquerading as science fiction
The Doctor is... out? Reports say Jodie Whittaker could be leaving Doctor Who

The Invasion of Time, which, in addition to showing the full TARDIS interior for the first and only time, also featured the invasion of Gallifrey by the Sontarans. As Thompson mentions, that serial was plagued with problems, ultimately resulting in a myriad of very cheap location shots, none of them looking particularly, well, TARDIS-y. Don't believe us? Let's have a look, shall we? 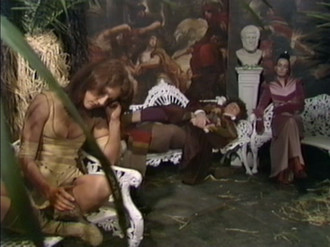 Not terribly thrilling, is it? Between that and repeatedly walking through the same drab places over and over again, this episode, which should have made the TARDIS exciting, instead fell prey to all the things the classic series is most often mocked for.

In fact, save Neil Gaiman's last effort, The Doctor's Wife, we've never seen any part of the TARDIS other than the console room and the wardrobe. Thankfully, it seems like we'll see something much more interesting this time. Thompson was certainly excited at the chance to explore the TARDIS, saying, "This year got to indulge my inner fan. (And I got to ask my kids what rooms in the TARDIS they've always wanted to find.)"

What room in the TARDIS would you want to find?

(via Doctor Who TV)