He's a Mac, but Justin Long is also the boy to watch in these sci-fi movies

Justing Long will go from being the Mac guy in those Apple TV commercials to playing the stressed boyfriend in Sam Raimi's Drag Me to Hell and in the creepy horror movie After.Life, as well as voicing a character in the animated Planet 51 this year, Long told SCI FI Wire in an exclusive interview.

Long stole scenes in such movies as Galaxy Quest, Jeepers Creepers and Idiocracy. In this year's After.Life, he co-stars with Liam Neeson and Christina Ricci. In director Raimi's supernatural horror movie Drag Me to Hell, he plays opposite star Alison Lohman. And in the animated alien-invasion adventure Planet 51, he's part of a voice cast that includes Dwayne Johnson, Seann William Scott, Jessica Biel, Gary Oldman and John Cleese.

After.Life killed Christina Ricci. Now it's killing us.
Liam Neeson pulls the curtain back on After.Life

SCI FI Wire spoke exclusively with Long on Saturday in Los Angeles. Below is an edited version of our conversation. Drag Me to Hell opens May 29, After.Life Oct. 30 and Planet 51 Nov. 20.

We spoke to Liam Neeson earlier this week about After.Life, and he was very complimentary of your work on the film.

Tell me about the part you play in that film.

Long: Christina Ricci dies early on in the movie, and she's taken in by this mortician who may or may not be pumping her full of chemicals that make it appear she's dead. He convinces her that he's sort of a medium for the afterlife, and she's just imagining this, [and] it's just part of her dying process. I play the boyfriend who becomes increasingly suspicious that she's still alive. [My character is] just unraveling through the whole movie.

For me, it was the biggest challenge I've ever faced as an actor. I had, like, two scenes that were normal scenes before the stakes shot up. I don't get those chances to play guys like that. He's going through this intense emotional tailspin throughout the whole movie. He's having this extended breakdown, pretty much.

I was scared to play those scenes with [actors] like Christina and Liam, but I was proud of what we did. It was overwhelming doing these heavy-duty dramatic scenes with somebody like Liam Neeson. And Christina is so good in it. She's so honest, and she looks amazing.

Long: I always saw it as a really dark, gothic love story. It's kind of like a love triangle between these three people. It's definitely dark, but it was shot beautifully. Agnieszka [Wojtowicz-Vosloo], the director, has an amazing eye. I hope it's as good as I think it can be.

When I was preparing for it, I like to watch movies that remind me of the character I'm playing. My friend helped me pick out a few movies he recommended. We watched From Here to Eternity, Romeo and Juliet and Ghost—movies that were romantic. But I don't want that to scare off any horror fans, because it's also definitely pretty scary. 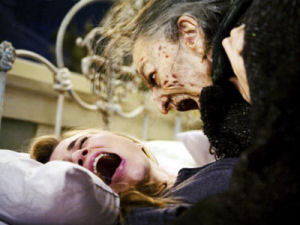 We visited the set of Drag Me to Hell last year during the séance scene, which was a lot of fun. The sets were very detailed a creepy-looking. Tell me about your part and working with Raimi.

Long: Oh, man, I didn't get to be there that day, unfortunately. Raimi is just the best. Aside from what a talented director he is, he's just such a collaborative, sweet, loving guy. On his set, there's such a great energy that he instills. Everyone feels like they're involved, and he has that effect on everyone. I've never seen anything like it.

In a lot of movies, it's the guy's movie, and there's the token girlfriend on the side, but this is Alison [Lohman]'s journey. It's her movie, and I'm the doting boyfriend on the side. She worked her ass off. I can't wait for people to see her performance. I hate using the phrase "tour de force performance," because it's so pretentious, but it applies in this case.

At the time, I was like, "Oh, nice hours. I get to go home, and I don't have to wear the blood," but in retrospect I really wish I had gotten to do more of the actual horror stuff. I do the "It's OK, baby, I'm just going to go in the other room, and things are going to be fine." Then I leave and all this crazy Sam Raimi stuff happens to her, and I come back and go, "What happened? What did I miss?" [Laughs.]

I met with Raimi before the movie and told him I would literally do a background cross or pee in my pants and keep walking. "I would do anything in your movie." He also let me write some stuff with his brother Ivan to fill out the character. He's the most collaborative, open guy. He was a real inspiration to be around.

And you're also voicing the character Lem in the animated alien invasion film Planet 51.

Long: Planet 51 is beautifully animated. I've gotten to see some of the scenes.

That's got a huge voice cast. Did you get to work alongside any of the other voice actors?

Long: I haven't actually worked with any of those actors. We all did our stuff separately. It's a funny script from the guy that wrote Shrek, Joe Stillman. It's really good. I really love animated movies, so to be involved in a classy, good one is a thrill.