If you're making low-budget movies for DVD, why not just do wild and crazy stuff? If it's really bad, no one's going to notice that much, and if it's great, you just delivered the Holy Grail. The Hills Run Red takes Warner Premiere (the studios "DVD premiere" label) to the next level. (It's now in stores.)

Here's all the info about the plot, the scares and other innovations that The Hills Run Red has to offer. We spoke to director Dave Parker and star Sophie Monk exclusively this week in Beverly Hills, Calif.

1. It's post-post-postmodern horror. Scream changed everything as a self-conscious meta-slasher movie; that got old pretty quick and was followed in short order by movies in which film or video itself was part of the horror (The Blair Witch Project, The Ring). Here's the third level: In The Hills Run Red, horror aficionado Tyler (Tad Hilgenbrink) seeks the long-lost print of a legendary slasher film. What he and his friends find in the woods is that the director (William Sadler) is still filming it, and they've become the third act! "I think by the nature of the fact that we're dealing with characters who are involved in film, it's something that nowadays has to be addressed," Parker said. "It's almost like the cell phone thing. In a horror movie, it has to be addressed, [but] it's a little harder-edge than what Scream would be." 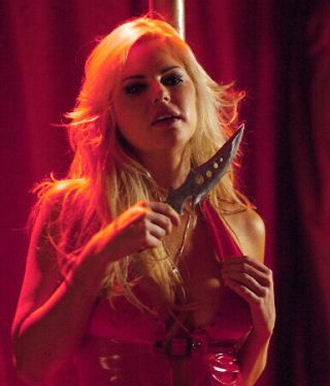 2. Sex kills. In the beginning, you'll think The Hills Run Red has some gratuitous strip-club nudity as a throwback to the '80s. Sophie Monk is lovely as Alexa, the troubled daughter of the lost film's director. It's not that she's immodest. She'll only bare all for the sake of a character, and there's a lot more to Alexa than skin.

4. This slasher is more than just another pretty mask. After Jason Voorhees, Michael Myers and Leatherface, it's been tough to come up with another scary look, but Hills Run Red's Babyface might just measure up. "I just got so bored with killers wearing hoodies and stuff like that and just being in black cloaks," Parker said. "I thought people had gotten really lazy."

5. It's short. At 80 minutes, what have you got to lose? The Hills Run Red is a fast-paced ride that makes its point, and, bam, they're out. It's really only 75 minutes when end credits roll. "Don't overstay your welcome," Parker said.

6. It's just plain fun. Haven't you had enough delving into the killer's childhood or moral judgments about victims? (Hello, Rob Zombie.) It's time to just have fun running through the forest from killers. "At first I [thought] this is going to be scary, but when you're out there, you get used to having blood all over you," Monk said. "Towards the end, you're just like, 'Oh yeah, I'm in the forest with wild dogs everywhere.' And, I've been to Iraq and stuff. I'm a tough girl. I'm Australian, so it's fine."