Horrific NSFW pic of Prometheus chestburster scene that never was

Got a strong stomach? This poor Prometheus crewman didn't. Check out an R-rated piece of conceptual art for the controversial Alien outing ... and be glad you had a light lunch.

It was kinda hard keeping track of the mutation merry-go-round and parasitic partner-swapping going on in last summer's Prometheus. Gunning for a gorier, even more gruesome edge and edit for Sir Ridley's prized prequel, the twisted wizards in the design department offered up this little slice of slightly NSFW shock to pair with an inter-species lovemaking session in one version of the screenplay.

Seems this horror was part of an original rough sex scene we told you about here involving Shaw and Holloway, deleted from the Prometheus final draft in an earlier pass by writer Jon Spaihts. This X-rated element was removed once Damon Lindelof and Ridley Scott came aboard the project. 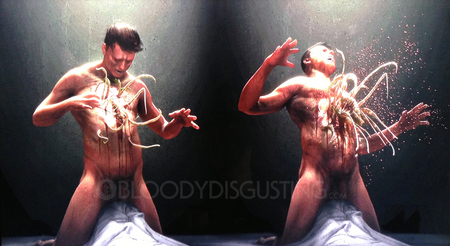