The humongous, hovering spaceship is one of the most iconic images in the history of sci-fi. Nothing says alien invasion like standing in the shadow of a giant saucer ... or pyramid ... or golf ball.

Before you catch up with the latest packed-with-big-giant-hovering-spaceships episode of V, check out some of the most stupendous spacecraft from sci-fi movies and TV.

That 'Alien Nation' remake from Midnight Special director may be back on track as a TV series
Alien Nation is getting a remake. Again. 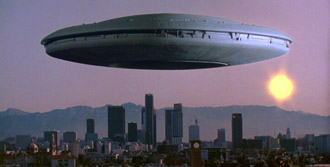 In Kenneth Johnson's really smart and scary original miniseries, reptilian aliens do a great job stirring up a bunch of Reagan-era paranoias by parking their giant saucers over world metropolises. The first really good representation on film or TV of what fanboys had been seeing for decades on the covers of paperbacks and on comic-book splash pages.

OK, you guys can travel millions of light years, but you can't put cosmic mufflers on these damned things, so their arrival doesn't make seismic shockwaves through our largest cities? In this new version of Johnson's classic, the iconic spaceships get props for having another SF icon packed inside them: domed, Logan's Run-like cities that look like riffs on the kind of stuff Frank R. Paul used to paint for the covers of Amazing. 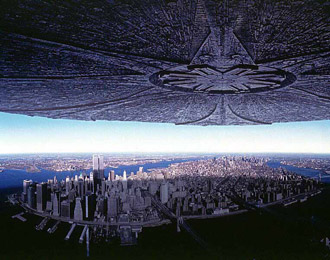 The first flick for which Roland Emmerich had the budget to destroy the world. These ships, designed by Patrick Tatopoulos and featuring kinda creepy organic textures, are so damned big they cause fiery atmospheric disturbances. They also blow stuff up real good. 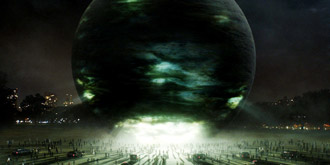 While the original Klaatu just parked his bitchin' 1950s hot-rod saucer (which had lines like a Chevy Coupe) in D.C., the Klaatu of more than 50 years later hangs his golf-ball-like ship over New York's Central Park, where it kind of just sits as if waiting for a whack from Odin's nine-iron.

Neill Blomkamp's instant classic features a big, city-sized spacecraft full of arthropod-like alien exiles that hovers over the city-sized slums of Johannesburg. Dig the heat haze and blurring of the airborne dust that give it a sense of scale in this brutal, funny and insightful allegory about apartheid. 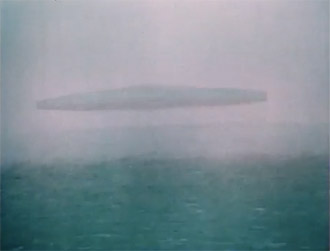 Another allegory about race relations, the antecedent of District 9, if you squint right. A humongous spacecraft parks over the badlands of the western U.S., and the Department of Immigration sets up processing centers for our new citizen ETs. The ship is just a big blur in the movie seen in video footage, but the static and intentional crumminess of the shots add a certain verisimilitude.

Close Encounters of the Third Kind

Probably the prettiest damned big spaceship ever filmed. Doug Trumbull and his team created a chandelier-like mothership that loomed over the Devil's Tower rock formation in Wyoming. Unlike the other spacecraft on this list, this one is musical ... and communicates with Homo sapiens via a cosmic game of Simon. 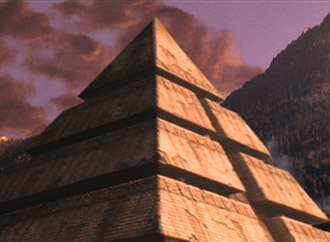 Emmerich again. The only pyramid-shaped craft on this list, used as bitchin' ride by the alien Ra. Kinda has a cover-of-a-1970s-prog-rock-album feel that might make viewers of a certain age want to put on old Alan Parsons LPs. Or maybe Van der Graaf Generator. Or anything with a cover by Roger Dean. 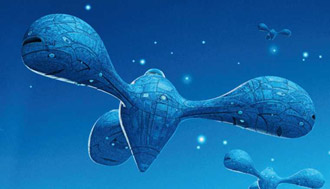 Great retro-1950s goofiness with the evil cosmic conqueror Gallaxhar (who may have been modeled on studio boss Jeffrey Katzenberg) arriving in a miles-wide, jack-shaped spaceship that deposits a giant Kronos-like robot that attacks San Francisco.

In Tim Burton's adaptation of the famous Topps Trading Card series, Harryhausen-like saucers loom over DC and Vegas and blow the crap out of landmarks.

In this first movie based on Chris Carter's classic series, a big spacecraft bursts out of the ice and looms over a secret base in the Antarctic. Mulder and Scully skid off the hull as it rises as if it were a waterslide, and somehow Scully stays a skeptic even after this experience.

Dr. Who, The Christmas Invasion 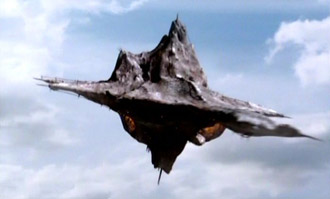 In David Tennant's first outing as the Doctor, the evil Sycorax park their humongoid spaceship over London just as the Doctor is in post-regeneration siesta mode. A cool concept for a hovering spaceship that looks like a mountain blown off of some other planet or a chunk of asteroid. "Sycorax ROCK!" The spider-webby, snowflake-shaped ship that hung over London in the Doctor Who special "The Runaway Bride" is also worthy of a shoutout. 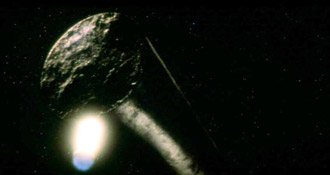 Not really a spaceship, but a sentient probe that tries to talk to whales and causes disruption of global weather in the process. Of course, the aliens who built the damned thing might have figured out that the signal on this beastie would disrupt the ecosystem of the very whales they're trying to talk to, but I guess mastering faster-than-light travel doesn't mean you're smart enough to think of everything. This hippie "Save the Whales" craft was a precursor to the more sinister hover job Nero's ship The Narada did over Starfleet in this summer's reboot Star Trek.