How Buffy's 'Anya' could have been in Battlestar

We best remember Buffy the Vampire Slayer star Emma Caulfield for her bunny-hating character, Anya, a former vengeance demon who was last seen being sliced in half by an ubervamp.

She appeared subsequently in the horror movie Darkness Falls, but she is now surfacing in a new sci-fi movie, TiMER, in which technology exists to identify a person's soulmate. Caulfield plays an orthodontist who is lonely because her metal implant registers a zero, meaning her soulmate hasn't yet implanted a chip in his arm.

Fortunately for Caulfield, she and her real-life husband have a lot in common: They are big sci-fi geeks, especially.

"It's funny, because when I first moved to Los Angeles, I would tell people I'm an orthodontist, because telling people you were an actress was so cliche," Caulfield said with a laugh. "And I was even more of a cliche being a waitress trying to be an actress, so I told people I was an orthodontist, and now I get to play one, finally."

Suprisingly, Caulfield could have been even more of a sci-fi icon: She admits turning down a role in Syfy's Battlestar Galactica, which she now regrets.

And she's holding out hope that a new Buffy movie comes together, even though her character was killed off in the series finale. "But anything can happen," she says.

"I do love sci fi, but my love is not unconditional, it has to be good," Caulfield says. "If I could somehow find my way into something brilliant like a Battlestar Galactica or an X-Files or something that is incredibly well done and combines the sci-fi element, I would do that." And a female superhero "would be awesome!" 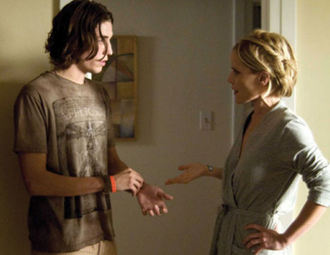 At the moment, she is playing out her superhero aspirations with her web comic series Contropussy, about a subversive cat, co-created with Camilla Rantsen, Christian Meesey and Thomas Mauer. It was recently published in book form. Caulfield hopes to turn the web series into an animated series someday—an inspiration she got from her former Buffy co-star and friend Seth Green, for whom she voiced some Robot Chicken episodes.

"The voice-over work I did for Robot Chicken was definitely an inspiration, Seth is a dear friend of mine," she said. "He has so much fun doing this, and I said, 'This is work?' I wanted a piece of that, to do something that was so freeing and something you created."

For the month of May, Caulfield is appearing at comic-book stores to sign her first book. "It's just fun to do this, it doesn't really feel like work," she says, "And we're developing a fan base, which is nice."

Meanwhile, Caulfiend can be seen in the upcoming thriller Removal, which she describes as "something like The Shining." TiMER can be seen in Los Angeles and New York in select theaters and on video on demand throughout the rest of the country.