How the giant-robot F/X in Transformers 2 nearly broke ILM. Seriously

Tag: Transformers: Revenge of the Fallen

Shia LaBeouf hurt his hand and Megan Fox looks good leaning on a motorcycle, but what about the real stars of Transformers: Revenge of the Fallen, Optimus Prime, Megatron, Bumble Bee and Starscream, who all return, and Devastator, twins Skids and Mudflap and The Fallen himself, who are new?

Visual-effects supervisor Scott Farrar was in charge of turning Industrial Light & Magic's computers up to 11 to create the new characters and told reporters that the sequel features 40 new characters. That and the increased resolution of the characters for new IMAX footage nearly exhausted ILM's render farms: After one hard night of rendering computer-generated footage, some of the hardware actually exploded.

"We did, we lost some machinery that night," Farrar said in a press conference on last week in Beverly Hills, Calif. "Little puffs of smoke, just like in the movie."

The largest sequence in Revenge of the Fallen was also the biggest in ILM history: the climax in which Devastator tears apart one of the great pyramids in Egypt. "We're trying to hit new levels of realism in every single thing we do, whether it's the render of the robot or the physical environment that they're reacting with," Farrar said. "It's just like upping the game on every level, so it was a pretty complicated show."

To give you some sense of just how big Devastator is, Farrar said that Optimus Prime has 10,000 moving parts. The computer algorithms actually manipulate each part to go from truck to standing robot. Well, Devastator is made up of upwards of 80,000 parts. The only thing that saves time is the camera position. The animators only have to transform the parts that are visible on screen.

"Every shot is dressed to camera," Farrar said. "We have a lot of moving parts and a lot of pieces that are all finished up, but every single time that we set up a new camera position, the cameras swirls around to the back, and doggone it, there are some pieces that are unfinished. We have to repaint them and get them so they can be animated. They only move if we need them to move, so it's a logarithmic jump to try and get all those pieces to move, and it's all up to the animators, frankly, to lay down the movement first. We tried to free it up to be creative." 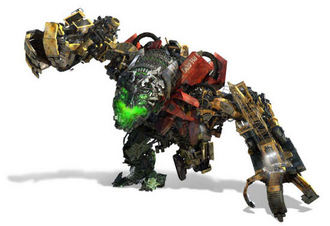 Even after the animation is complete, the filmmakers need to run it by Hasbro, the toymaker that is a partner in the production of the films: The movie can't show a move that might break a kid's corresponding toy in real life. "All this has to be sort of bought off also by the Hasbro people, because we want to have the essential shape of the transformation fit to what the toy will do," Farrar said.

Revenge of the Fallen also required the visual effects artists to figure out how to put big metal robots underwater. You've seen snippets in the trailer of Decepticons diving to bring up Megatron's carcass. ILM developed a plug-in to their software that adjusted the animation to look like it's underwater.

The biggest giveaway in any sequence is light sources, says Farrar, and underwater lighting gets even trickier. Presumably, there is no light at all in the deep depths of the ocean, although living robots may emit some light of their own.

"Everything that we do in our world is all about the light," Farrar said. "It's not just building the robot, but it's about how it commingles with all the light sources. It might be ambient. If they're really deep in the water, how much light do we give them? How much internal lighting should they have? We had a lot of deep-sea underwater research photos that we looked at, and we sort of gleaned from that. How clear do we want to be? How much plankton and spinaci, we called it, floating in front of the camera do we want? All these little tricks to try and make you believe you're really underwater, we have to employ."