Anyone who calls himself a Star Wars fan knows that the teddy-bearish creatures George Lucas featured in Return of the Jedi are a divisive lot. In last night's episode of How I Met Your Mother, Neil Patrick Harris' Barney Stinson explained precisely why with laser-like precision.

Barney called it the Ewok Line—which basically means that anyone born before May 25, 1973, was old enough when Jedi was first released to see them as an overly cutesy bid to please children and so hates the Ewoks for all they represent. Anyone born after that date will love them, as the Ewoks remind them of the teddy bears they still cozied up with at night. 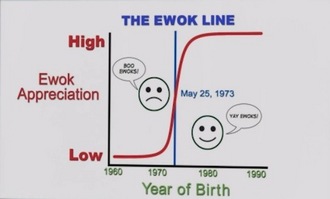 All of which, really, is as succinct an explanation of the Great Ewok Divide as I've heard. And, what's more, it came at the tail end of this incredibly nerdy (yet accurate) PowerPoint presentation exploring Ewok culture:

Most impressive. However, I am old enough that the Ewok "Yub Nub" song is like fingernails on a chalkboard.

If you want to see the entire episode, bounce over here.