How Kick-Ass' killer Hit Girl is like Alien's Ripley

The upcoming film Kick-Ass may very well be the most controversial film of the year so far—at least judging from reaction to the R-rated trailer—but screenwriter Jane Goldman and comic artist John Romita Jr. defended director Matthew Vaughn's decision to remain true to the bloody, profane source material.

Based on a comic book by Mark Millar and Romita, Kick-Ass tells the story of real-life would-be superheroes, including a murderous, foul-mouthed 11-year-old called Hit Girl, played by Chloe Moretz.

Speaking to reporters at WonderCon in San Francisco last weekend, Goldman and Romita said director Vaughn (Layer Cake) made the movie without studio backing after he refused to tone down the film to suit studio demands.

"The conversation I had with Matthew when he found out what the studios said to him first before he started to do his own is that they wanted Chloe to be older," Romita said. "'We can't have a little girl doing that. So we want you to turn her into a 20-year-old or a 19-year-old or take her out with no swords.' He just said, 'F--k off. I'll do it myself.' Those were his words. And now the ultimate in justice is that he sold it back to the studio, so to speak. I don't think Lionsgate turned them down, ... but those that turned him down, he sold it back to them. ... I think that is such justice."

Goldman added, "I found it astonishing when they came back to us saying that they thought it would be less offensive if Hit Girl were an older teenager. Because to me, it would have been a great deal more offensive if she was a sexualized character. I think that would have been extremely offensive. I think what's so strong about Hit Girl is that she's not there to be sexual." 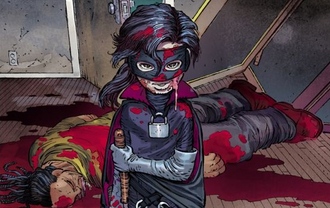 Romita agreed. "I think what's so badass is, how can a little girl become such a force? And I likened it to parents that turn their kids into super athletes. Even against their own will. They become unconscious athletes, almost to a fault. They become hardened. It kind of works the same way. If you treat someone so intensely, ... why couldn't they? I don't believe the 'unbelievable' part. Actually, Matthew and Jane toned it down. There is more blood in the comic book than there is in the movie. So they actually showed a little class, where I had none at all. ... But I buy into it. I don't have any problem with a little kid becoming an avenger."

When Goldman began adapting Millar's story, bringing Hit Girl to the screen was one of the things that most excited her. "To have the opportunity to explore her relationship with her father [Big Daddy, played by Nicolas Cage, who trains his daughter to become a costumed vigilante], you have more time to do that in a movie [than a comic book]," she said. "I think it was the fact that she is so young and she's a non-sexualized character that made her so strong."

She added: "In movies, people talk about there being strong female characters, ... and—with the exception, perhaps, of Ripley [Sigourney Weaver] in Alien—I really don't buy it. Usually when they talk about there being a strong female character, they mean she's got a gun and shoots people, but she's probably also got her boobs on display and is there to look attractive. And that, to me, ... killing someone doesn't make you a strong character. It's the focus. I mean, obviously, she's crazy, Hit Girl. She's been raised by a madman. ... But it's that intensity and focus that makes her a genuinely strong character. I think it's a really rare thing in cinema, and I just leapt at that."

Kick-Ass will be released in theaters on April 16.