How NASA just sent the Mona Lisa to the moon (with lasers!)

We may not be getting a transporter anytime soon, but apparently we're starting to get good at shooting information through space with lasers. In fact, a few months back NASA succeeded in transmitting an image of the most famous painting in the world from the Earth to the moon using precisely timed laser blasts. Lasers and fine art, together at last.

The experiment was conducted using NASA's Lunar Reconnaissance Orbiter, a probe that's been orbiting the moon for three and a half years. The Goddard Space Flight Center in Maryland regularly sends laser blasts to the orbiter to measure its position in lunar orbit, so NASA decide to use that same technology to test whether they could send something more sophisticated via laser, like Leonardo da Vinci's legendary portrait.

"It's a familiar image with lots of subtlety," said Xiaoli Sun, the principal author of a research report published this week on the experiment. "You can immediately feel whether the image looks right, and how much information got lost."

To transmit Mona Lisa from the Earth to the moon, researchers encoded a black and white version of the painting as values on a 152-by-200-pixel grid. The painting was translated to a total of 4,095 values, all representing various changes of shading between black, white and gray. From there, each value was piggybacked on a laser pulse, and the pulses were fired to the orbiter at precisely timed intervals at a rate of 300 per minute.

Once the pulses were received by the orbiter, the Lunar Orbiter Laser Altimeter (LOLA) reconstructed the painting based on the time at which each value arrived. Though turbulence during transmission produced about a 15 percent error rate, researchers were able to use the same technology that protects CDs and DVDs from bumps (Reed-Solomon data coding) to smooth things out. The end result looked like this (note that the left side represents what the painting looked like before coding errors were corrected). 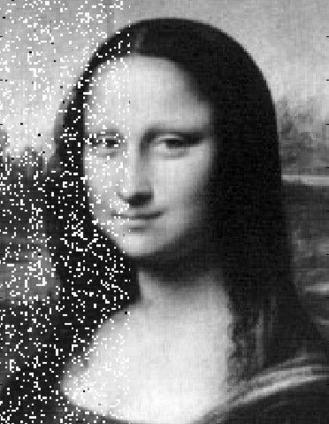 Once complete, the painting was beamed back to Earth via the orbiter's standard radio communcations. Though the transmission was slow, and the image was a bit low-res, this marked the first time we've ever sent something that far using lasers. In the coming years NASA's planning more ambitious versions of this experiment, with the hope of one day using lasers as an alternative to radio communications.

"In the near future, this type of simple laser communication might serve as a backup for the radio communication that satellites use," LOLA investigator David Smith of the Massachusetts Institute of Technology said. "In the more distant future, it may allow communication at higher data rates than present radio links can provide."