Anton Yelchin, who plays young Kyle Reese in Terminator Salvation, told SCI FI Wire that he studied the performance of Michael Biehn, who first played the character in the original Terminator movie, to get every detail right. Salvation is set in our future, but more than a decade before Reese travels back in time to protect Sarah Connor (Linda Hamilton) in James Cameron's 1984 movie.

"Having studied it, it's very elegantly done," Yelchin said in an exclusive interview last Friday in Beverly Hills, Calif. "Unless you sit there and study it, you're not told, like, 'Oh, my God, look at how much is going on.' The scenes where he's talking a lot, where maybe it's him telling her history, really, I watched a lot of that. I watched a lot of that for history, but I watched most of it for how he says it, his particular reactions."

On the day Yelchin's other big summer movie, Star Trek, opened (he plays Chekov), the young actor had already moved into Terminator mode. He went on to explain how he channeled Biehn to show how Reese would grow up to save John Connor's mom and conceive Connor himself. The following Q&A features edited excerpts of our exclusive interview with Yelchin. Terminator Salvation opens May 21. (Possible spoilers ahead!)

How monumental was it for you to say, "Come with me if you want to live?"

Yelchin: It certainly took a lot of studying that moment, that moment in T1. I watched it throughout the day on set. I watched it beforehand a lot. There's a fascinating way that he does it, which is kind of, if there was a continuation, it would be, "Come with me if you want to live, or you're f--ked." There's a certain edge of "You can do this right now, and you should do this right now," which was kind of cool, I thought.

I might be overanalyzing it, because I watched it so much. You need to really watch it a lot to get the little [nuances], and I'm sure it wasn't deliberate. It was just the take that they used, but that's part of the hero of Kyle Reese. There's an objective that he needs to achieve, and there's an intensity to it, but there's also a masculinity and a strength to it. So having watched all that and kind of getting to set and trying to kind of use those things and incorporate them into the performance, it's a lot of work for one line, but it's a hell of a line.

Is cocking a shotgun one-handed more practical, or is it just badass?

Yelchin: It's badass. Actually it's not practical at all, because what happens is the gun jams a lot of the time. It's not supposed to be shot like that. You're supposed to shoot it like this [horizontally]. If you do it like this [vertically], there's a good chance the cartridge jams, and it did jam a couple times. On the shooting, it jammed a bunch in rehearsals. Not supposed to do it. Have you ever seen a cop [cock one-handed]? But it looks sick. Come on. 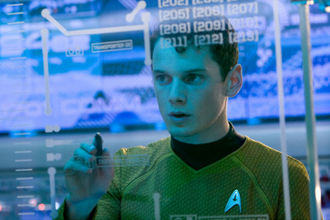 Yelchin: I mean, not to me it isn't. I mean, I don't know. So far I haven't heard anything where people don't appreciate it. I mean, in the grand scope of all performances that people talk about, is it underrated? Maybe.

He's such a complex character, and there was so much for me to use, because you see him paranoid, you see him angry, and then you see him the hero from start to finish. Then you see him insanely vulnerable, and you see that he has this fixation on Sarah Connor from a photograph, meaning his whole internal sort of being has idealized this woman and created this woman in his mind that he's fallen in love with, and that speaks to an incredible range of loneliness and even sexual frustration. So there's so much to this character there. When she bites his hand, and he says, "Terminators can't feel pain. I do." That, to me, there's a huge amount of stuff there, too. It's such a dense performance, and I guess in that way it is underrated, because it's dense and yet very eloquent in the way that it's handled.

Have you gotten to meet him?

When I went into Star Trek, for example, I didn't know very much about it, so it required a lot of research just to get to know on a basic level, before I got to studying the characters, just to get to know the universe. This universe I felt I knew so well. I felt like I had known this character for years, which I had. I probably saw T1 on VHS or something when I was, like, 5 or 6, probably. ...

With regard to Star Trek, do you have any inkling as to what the next mission will be?

Yelchin: No idea. I mean, no idea.

I know it's too soon to decide, but creatively, we imagine the possibilities.

Yelchin: Of course. Storywise, who knows? That's in the writers' minds. I've been asked, "Do I have any desires? Chekov to get with the green girl?" I don't know. I really don't. I would rather embrace whatever is there, work with that. It's more exciting to me.

With the new timeline, could they go on the same missions as the original series?

Yelchin: Right, I honestly have no idea.