In the upcoming high-school horror comedy Jennifer's Body, writer Diablo Cody dug deep into her own adolescent past to depict the powerful "girl crush" that animates the on-screen friendship between the demon-possessed vixen Jennifer Check (Megan Fox) and her sidekick, Needy Lesnicky (Amanda Seyfried).

"It was really about the sort of really fiery, dramatic friendships that girls have when they're young," Cody said in an exclusive interview on Tuesday in Pasadena, Calif., where she was promoting United States of Tara at the Television Critics Association summer press tour. "It's funny. I have girlfriends now, obviously. I'm kind of a girl's girl. But when I was a teenager, I would have these just passionate girl crushes. They weren't necessarily sexual, but they were powerful. I have never really seen that kind of passion. I don't know what the female version of a bromance is, but that's what's fueling Jennifer's Body."

Powerpuff Girls creator Craig McCracken on live-action reboot: 'I'm curious to see what they do with it'
The CW's The 4400 reboot goes straight to series; Powerpuff Girls, DC series score pilots

Of course, in Hollywood, the "dorky" one is played by gorgeous movie star Amanda Seyfried. You'll have to suspend disbelief. 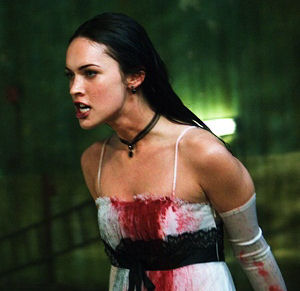 "Amanda is gorgeous, but in the movie, the dynamic is that she's the mousy one, and Megan Fox is the babe," Cody said. "I was always the Amanda in that scenario. I always had the beautiful friend, and I would always have the second pick of guys. Now that I've grown up, I'm glad to be that kind of girl. I would rather be the beta girl."

Footage screened at Comic-Con last month portrayed the relationship Cody described above and showed a few icky scary moments. A sequence set in an asylum where Needy is committed after the Jennifer ordeal is a bit more secretive.

"That's at the beginning," Cody said. "We have an interesting chronology in the movie. The asylum scenes were fun to shoot. It's not a real long sequence. There is one memorable violent moment in the asylum that I really like, and it tends to get kind of a gasp from the audience."