Korean model/actress Gianna Jun, the star of the upcoming live-action Blood: The Last Vampire, tried to bring to life the intense, 400-year-old vampire from the 2000 anime movie and subsequent manga on which the new film is based.

"When I first saw her, she looked very mysterious, unfriendly and gloomy," Gianna said in an exclusive e-mail interview on Monday. "It was kind of shocking, but very attractive."

Gianna plays Saya, a "halfling," or person with a human father and vampire mother. Though she is centuries old, she looks like a schoolgirl, which allows her to infiltrate her enemies. She works with a secret organization, which cleans up after she goes all slayer on evil vampires. Ultimately, she hopes to find and destroy head vampire Onigen to avenge her father's death. If we've learned anything from revenge movies, finding peace is never that simple.

"I wanted to portray Saya's inner pain and her charm through more action scenes," Gianna said.

The film's fight scenes, in which Saya takes on hordes of vampires in forests and back alleys, live up to the title. Gianna did not know quite how bloody the film would be, because a lot of the splatters were added in post-production.

"I myself was pretty surprised when I watched the finished product," she said. "It was much bloodier than I had imagined while filming. I didn't realize I had killed so brutally. Ha ha." 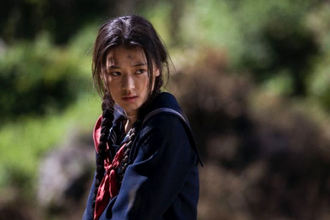 Gianna has starred in such Korean movies as My Sassy Girl, Windstruck and Il Mare (the basis for the American remake The Lake House). In this, her first action movie, Gianna felt empowered by her newfound abilities. "I was a little shy to be daring and violent as a female actress, but now I've become even more daring and strong," she said.

As in Hollywood movies in which pretty boys learn kick-ass martial arts, Gianna had to undergo rigorous fight training. "I trained from basic physical training to kickboxing, sword fighting, fighting on wire, etc.," she said. "Every movement was difficult. If I had to pick the easiest, [it was] probably running."

Even the film's simpler action scenes required days of exacting choreography. One sequence has an American student watch as Saya fights vampires in the school gymnasium. The audience only sees snippets of the fight through the student's eyes, but Gianna still had to spend two to three days performing the moves.

Saya is a Japanese character from the Japanese style of anime, but the Korean Gianna felt a broader connection to her. "I didn't approach the role as a Korean or as Japanese, but as an Asian," she said.

Blood: The Last Vampire also afforded Gianna the opportunity and responsibility to learn English. "I started to learn as I began to prepare for Blood," she said. "I don't get nervous while speaking. I learned that with great effort, you can achieve anything."