How death stalked the stars of CBS' Harper's Island

The stars of CBS' upcoming horror mystery thriller series Harper's Island told SCI FI Wire that they signed on to the 13-episode series not knowing if or when their characters might be killed.

CBS describes Harper's Island as the story of a group of family and friends who travel to a secluded island off Seattle for a destination wedding. Abby Mills (Elaine Cassidy), whose mother was killed on the island by a homicidal maniac's rampage seven years ago, journeys home for the first time since the horrific event for the wedding of her best friend, Henry Dunn (Christopher Gorham).

Henry, the boy next door, is marrying the woman of his dreams, Trish Wellington (Katie Cassidy, no relation to Elaine), a beautiful and wealthy heiress. As the wedding festivities begin, friendships are tested and secrets exposed as a murderer claims victims, one by one, transforming the wedding week of fun and celebration into a terrifying struggle for survival. By the end of the 13 episodes, all questions will be answered, the killer will be revealed and only a few will survive.

Following is an edited version of our interview with the Irish-born Elaine Cassidy and Gorham (Jake 2.0). Harper's Island premieres on CBS April 9 at 10 p.m. ET/PT.

With a horror movie vibe to it?

Gorham: Exactly. It's a really good way to think about it, because it's hard to describe sometimes. Especially when people think, "Well, what happens if it succeeds? How do you do a season two?" But if you just explain, "It's like Survivor," then suddenly it makes sense.

Cassidy: And also it's not our headache. We don't have to worry about it.

So in a way did it feel more like doing a film, because you knew it would have a finite ending?

Can you talk about each of your characters? Chris, you're the townie kid who marries well, and Elaine, you're coming back to the island for the first time in a long time? 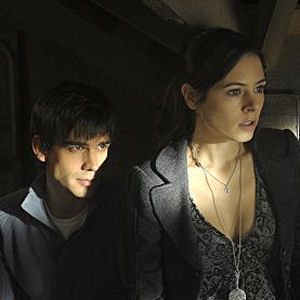 Cassidy: I play Abby Mills, who's from Harper's Island, just off the coast of Seattle. She hasn't been back to the island in seven years, because seven years ago there were six murders on the island by a guy called John Wakefield, and Abby's mom was one of the people who were murdered. And her dad is the sheriff of the island, and he's the one who caught and shot John Wakefield, killed him, and kind of hailed a bit of a hero. ...

It's a small island, not a huge population, so it affected everyone. And her relationship with her dad [went south] straightaway. He didn't know how to deal with the loss of his wife and then a grieving child on top of it, so he thought the best thing was to send her to L.A. to stay with her grandmother. So at the age of 18 she's sent away. You know, just lost her mom, lost her dad, away from all her friends.

The only person she stays in contract with is Henry, who, they've been best friends since they were kids. And he really counsels her through the dark times, the tough times. And so she's tried to make a new life for herself in L.A. And so coming back to Harper's Island is a really big deal, because she hasn't been back in all this time, but it just shows the friendship she has with Henry, because that's what brings her back. And so she's got a lot of things to kind of face and deal with for the first time. ...

Gorham: And Henry grew up in the suburbs of Seattle. His parents have like a summer store on the island, so he spent his summers there. Met Abby when they were kids, and she's been his best friend since then. He fell in love with Trish Wellington when she started coming down with her dad, and used to work on their boat. And they dated in high school, they broke up as they ... went off to college. Went and got his MBA, and then he reconnected with Trish, and ... when they decided to get married they decided to have it on the island. ...

I think for Henry it was his way of trying to reclaim his childhood, ... reclaim this place that has so many happy memories that was spoiled by these horrible murders. And ... I think ... he's very sensitive to what Abby is going through and really wants to make it a safe place for her again, and so that's where things start.

The show starts off kind of as one thing, and executive producer Jeffrey Bell says that by the fifth or sixth episode there's running and screaming and mud and blood and all that. Can you talk about where the show evolves?

Gorham: I don't know how much we can talk about that.

Cassidy: ... Everything's in there. We can't say at what point and what comes first and what, but ... because there's 13 hours, as opposed to a film, because there's so many characters, you do have time to get to know the characters. Some less so than others because they go earlier. And, boy, yeah, I mean, it builds.

Gorham: It does start in a very happy place. It starts ... the week of this wedding that everyone is thrilled to be a part of. And it's being surrounded by friends and family and reconnecting with people. And so it starts in this great place, and for a while the guests of the wedding are not aware that horrible things have started to happen. ... Once they become aware of the horrible things that are starting to happen, then the tone of the show will shift.