Francis Lawrence, executive producer and director of the first four episodes of the upcoming NBC series Kings, told reporters that he didn't sense much difference between directing it or his feature films Constantine and I Am Legend.

"Honestly, it was not that different," Lawrence said. "Me doing music videos is obviously very different, but, look, doing the two-hour pilot was like doing a small movie. It was a huge difference in budget, a huge difference in time. The last movie I did, I think, the budget was about $150 million, and we shot for 95 days and it took three years of my life. And this thing, from the time we kicked off and got going was about three months."

SCI FI Wire joined in on a recent conference call with Lawrence in which he talked in depth about Kings. Following are edited excerpts from that conversation. Kings premieres Sunday at 8 p.m. ET/PT.

Tell us about the story. How do the first four hours unfold?

Lawrence: Well, I think the two-hour pilot is a real introduction into the world and the characters and what we can expect. And then the following hours are really just all the way the different stories that can evolve from our kicking-off point. [In] the pilot we meet David, sort of the innocent kid, naive, a wide-eyed kid that's, through a series of circumstances, brought into the world of royalty in this country. And the relationships are set up. The characters are set up. And then the different stories that follow are just all the ways that the stories can go. You have got so many great characters and rich textures and ... I do not want to give away too much. ...

Lawrence: I would love to be. I mean, it is all sort of dependent on whether or not I am making a movie. If I am not making a movie, and the new season gets picked up, I would be happy to come back and do a couple of hours. I did the pilot and then came back and did the first two episodes after that, then stayed on very involved. I came back and helped another friend do an episode. I am looking at all the scripts. I am looking at all the cuts. I am talking to most of the directors. I sort of kicked into gear with the crew to make sure that the aesthetic and the feel and the tone all works. I would go and talk to all the actors to make sure that they were clear with what they are doing, and they could always come to me if they had questions. So I tried to stay as involved as I could be, not actually living in New York with them and being there every day. 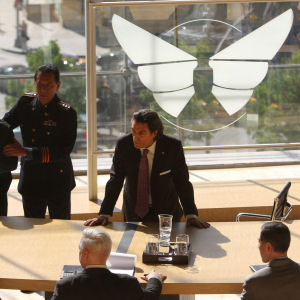 How much does religion factor into the show? Are there other biblical stories tied in there?

Lawrence: It is really following the template of the original stories and then with a lot of fun and added creativity to it. I kind of like doing these things, which is you take an old, mythical tale and reinvent it in a newer world, because the characters are classic and they are such great archetypes. And it just seems to work, and people seem to connect with it because it is sort of in our narrative DNA. But there is not a lot of God ... in this story. There is mention of God, and you can sort of feel the hand of something maneuvering things, that there is a hand helping David along at times, helping other people along at times. But it is not specifically a Christian God, ... necessarily.

Given your background in sci-fi films and the fact that your co-executive producer Michael Green is so entrenched in comics and sci-fi, are there any fantastical elements at all to the series?

Lawrence: Yes, absolutely. One of the things that I loved about the script is the magical realism. It had all the things that I love. One of the things I love most is to create worlds, and this was a world to create, which was a lot of fun. But it is also a world that has to feel real, has to feel grounded, which I like, so that it is not complete fantasy. One of the other things that really attracts me to stories, that this has, is magical realism, which is there are moments in the series where things happen that probably normally could not happen, but they have. But they are done in a way and presented in a way where you could believe that they actually could have happened, and I am really attracted to that.