How Dylan Walsh makes the new Stepfather a killer remake

Dylan Walsh, who's been playing doctor on Nip/Tuck since 2003, looks like he could use a few stitches himself right about now. Fake flesh hangs from his neck, and he's a bit bloodied up. He's playing the title character in The Stepfather, the upcoming horror film that reboots a cult classic from 1987.

Much like the original (which starred Lost's Terry O'Quinn as daddy dearest—who, according to producer Mark Morgan, declined a cameo role), the new movie centers on a sociopathic killer who blends into broken families. When the new wife and kids inevitably disappoint him, he slaughters them and moves on to the next unsuspecting household.

SCI FI Wire was on set at Sony Studios in Culver City, Calif., a few weeks ago during the filming of The Stepfather for a scene in which Walsh embodies wicked wedder David Harris ... and leaves a few bodies lying around.

The psychotic patriarch's current target is newly single Susan (played by House's Sela Ward). Susan's son from her first marriage, Michael, is played by Gossip Girl's Penn Badgley. In the original film, everything was seen through the eyes of a stepdaughter. For the remake, the role was altered to a male child, so Badgley has some high heels to fill in the role of Jill Schoelen role. Zombieland's Amber Heard, meanwhile, brings the beauty as Michael's 17-year-old girlfriend, Kelly, who also catches the wandering eye of Walsh's David.

So what's the difference between Nip/Tuck's surgeon Sean McNamara and the deadly David Harris? "Bigger knives," Walsh said with a chuckle. "I am having so much fun doing this [overt bad guy role], because in Nip/Tuck you are never going to portray what that guy is. But here, it's like, in a moment, you can go back and forth between these two, the genre film, and then the part of it that is just this family story. It's fun. It's liberating."

Director Nelson McCormick, who also directed last year's Prom Night remake, and his writer, J.S. Cardone, are retelling the stepfather's story with less gore and more suspense. Actually, the tale was and is based upon the misdeeds of a real-life serial slayer, John List, who murdered his mother, wife and three children and then disappeared for 18 years until a tip to America's Most Wanted caught him.

Producer Morgan says that the filmmakers looked at several actors before deciding on Walsh, who impressed everyone with his range. "He has that personality that is nice, jovial and trustworthy," Morgan said. "When you watch [him work], it's delicate and subtle, a small movement in the face or where his smile dips for a second and then dips back up, which is freaky. When he turns and gets really angry in the more violent scenes of the movie, you're like, 'Holy ... !' He goes from zero to 60. I think you're more scared of someone you don't expect that from."

For his part, Walsh says "there's a stuffiness" to his character. "He's stiff, and I imagine he's had these different families, and he's tried different things," he said. "There's a repertoire of tricks, and they hadn't worked before, and he's trying to make this one work. That's what his flaw is: He's caught up in this old-fashioned way. He's well-meaning. It's just that he wants to control every facet of it. He's got this 1950s thing. He demands to be the head of the family, and what he says rules."

On set this day, David's plans aren't working out so well. Ward's gore-stained hand is testament to the scene they've just shot: During a tussle in the Harris household (some of the homey sets from Prom Night were repurposed here), Susan has picked up a shard of broken mirror glass and torn at David's throat with it. 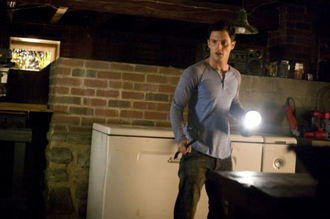 The honeymoon is clearly over at this point in the filming. But for Ward, it was important to rationalize Susan's falling for this guy who seems too good to be true. "She's recently divorced, and just had an ass for a husband, and it has been a while, and here is somebody" who is everything a woman could want, she said. "Just look at those blue eyes." In the beginning, he is "very attentive and great about the family and the kids, and wants everybody to be together. It's all of those things that women get totally hooked into, naïvely. And she falls for him."

In the middle of the melee is problem child Michael, who is angry that his real father has left for a younger woman. Badgley says that keeping his character grounded and realistic is important, even "in the scenes where we are stabbing each other; we will bring as much depth and weight and reality to it as much as we can. It is a real story. These are real people. But then when it comes to the point where you've got fake blood, and you're like 'Ahhh ... !' To me, personally as an actor, that part of it is just 100 percent fake. You've just got to fake it well."

While we can expect a PG-13 rating for The Stepfather, boundaries will be pushed. One of the things that tips Michael off that things are amiss with his mom's new S.O. happens when David basically invites Kelly to "come to daddy."

Heard finds it amusing. "Yeah, it's kind-of nice, kind-of kinky," she said with a laugh, standing outside the soundstage between takes. "What's wrong with that? Dylan Walsh is an amazing actor. He's very creepy, like, ... I don't know where the character stops and he starts. I can't tell. But he is committed to his role, and he walks around kind of as the character, so you just steer clear."