How Enemies & Allies rewrites the '50s, with superheroes

Best-selling science fiction novelist Kevin J. Anderson said that his latest novel, Enemies & Allies—about the meeting of Batman and Superman—takes place in the simpler times of the 1950s, despite potential backlash and criticism from fans.

"A lot of fans would rather see a novel like this take place in modern times, but it didn't make any sense to me that the first time Batman and Superman would meet would have been in 2009," Anderson told SCI FI Wire in an exclusive interview from his home in Colorado. "Those heroes have been around so long you would be sure they've met before. And I love the era. It was a time of paranoia, the [Sen. Joe] McCarthy era, the Red Scare and flying saucers."

The world of Dune expands in exclusive first look at 'Blood of the Sardaukar' comic series
The Duneiverse is expanding! New books & comics coming to spice up Dune world ahead of upcoming film

The book deals with events surrounding Superman's first encounter with the caped crusader. In keeping with the period, Anderson has Superman's alter ego, Clark Kent, going with young photographer Jimmy Olsen to such movies as the original Invasion of the Body Snatchers and It Came From Outer Space while Batman's alter ego, Bruce Wayne, throws a party for Eleanor Roosevelt, Rock Hudson and Marilyn Monroe.

"I love the fact that there's a revival of interest in that era [with the upcoming remake of Creature From the Black Lagoon, not to mention homages in Monsters vs. Aliens], and I can't be happier about the revival of those kind of movies," Anderson said. "You just know that every time Clark Kent saw an alien being portrayed in the movies back then, it was twisting a knife in him."

In the novel, Batman questions Superman's claim that he is from another planet, and he tries to figure out how the Man of Steel can fly and fend off bullets. He looks at photos closely for strings or mechanical devices and assumes he's an ally of Lex Luthor.

Meanwhile, Lex Luthor convinces real-life Sen. McCarthy to refocus the Red Scare into a campaign against aliens of all kinds, aiming for a backlash against Superman.

Anderson makes use of real historic events, such as the Roswell Incident and the launching of Sputnik, but isn't afraid of fudging history. "I added a tongue-in-cheek author's note that points out that I knew that McCarthy died a few months before Sputnik was launched," Anderson admits. "It's amazing to me that some people will pick a small detail out and dwell on that while they accept the fantastic aspects of the situation."

One thing Anderson doesn't play around with are the heroes' origin stories: DC Comics monitored every step of the novel to ensure that it conformed with the history of the characters as it's already been established. "When I read them as a little kid with my cousin, I knew that they did some things together, but they also had their solo adventures," Anderson said. 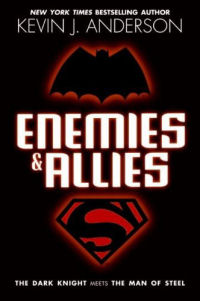 Anderson cribbed Frank Miller's Dark Knight mood and George Reeves' style from TV's Adventures of Superman and melded them into a novelization that both fans and casual readers can enjoy. "At first I thought that Superman seemed almost tame and uninteresting, but his story is more about alienation, pardon the pun," Anderson said. "He wants to have a real life, and yet the whole world depends on him. ... Batman is lost and tortured and is not averse to hurting the bad guys and punching them out."

Anderson left out a few things he wished he could have included. "I really wanted James Dean to be there [at a Wayne party] and have Alfred [the butler] say, 'Drive safely,' but it was too many years off," Anderson said. "I also wanted to put a scene where a robber shoots Superman in the chest until his gun is empty and finally throws a gun at him. It was too late to put that in."

Anderson promises there are "tons of in-jokes for real die-hard fans, but those who don't know every aspect of the characters won't feel left out. Some current graphic novels and comics seem to be written for the 10 people who know every single thing about the comic universe. I want to write for the general fan. I also enjoyed getting into the head of Lex Luthor and found that Lois [Lane] hates him as much as he hates Superman, and in that era he's the ultimate sexist and thinks she should be barefoot, pregnant and in the kitchen."

Anderson is attending the Nebula Awards ceremony in Los Angeles this weekend and will also give a lecture and sign his books at the UCLA Festival of Books. Enemies & Allies hits retailers on May 5.