Kyle Newman, director of the Star Wars-themed Fanboys, told SCI FI Wire that he had to walk a fine line: The movie celebrates the franchise, and creator George Lucas was generous with permissions and technical aid, but Newman and the cast admit that they had—to put it politely—mixed feelings about the prequel at the heart of Fanboys: Star Wars: Episode I—The Phantom Menace

"I loved Episode I," Newman said in an exclusive interview Thursday in Beverly Hills, Calif. "I know I'm probably one of a few people, but I think I got acclimated to it because of all of the spoilers. So I wasn't shocked; I mean, a lot of people went in cold, and they were like, 'What the hell is this?'"

Newman added: "But there was no way it was going to live up to those expectations, so I think I eased into it and softened my expectations to what it was."

Newman said that he was at first intimidated by the prospect of asking for Lucasfilm's permission to use Star Wars imagery, but was delighted to discover that the company was happy to share. "They said, 'Send us a detailed list of every reference and everything that you want to use, and we'll go through and approve it,'" he recalled. "There were one or two things they wouldn't let us use, like the holiday special; we threw it in there underneath, like, 'Boba Fett Burger King cup, holiday special,' and they were like 'No.' But I just think they wanted to know that we were genuine fans who weren't going to take this stuff and rip apart Star Wars or make fun of Episode I."

The comedy-drama centers on a group of friends—played by Dan Fogler, Chris Marquette, Sam Huntington, Jay Baruchel and Kristen Bell—who decide to road-trip it out to the Bay Area, and specifically Skywalker Ranch, when one of their own falls ill with cancer. Why Skywalker Ranch? Because it's 1998, they're all Star Wars fanatics, and the guy who's dying probably won't survive long enough to see The Phantom Menace, so they're on the way to crash the ranch and check out a work-in-progress print.

SCI FI Wire talked to Newman, Fogler, Marquette and Huntington. The following is an edited version of those interviews.

What did each of you think of Episode I when you first saw it?

Dan Fogler: I was impressed with the technology, but my initial response was you can hug Chewbacca but you can't really hug that jowl-frogman. Just the fact that it's part of the series, you have to respect the epic nature of it, the expanse of it. It's really Star Wars—there's several planets, several different environments. It's intense, dude. I think you have to appreciate it for that, although I love Han Solo, and there's something about the first three that were more tangible, like you could climb into the Millennium Falcon. I feel like it's a trick of the mind that audience members today, they go and it's a lot easier to trick them with inorganic things—spaceships and buildings.

Chris Marquette: I didn't like it. I was really disappointed. I mean, I was really happy I saw it, but I was just saying it doesn't matter what Anakin Skywalker was doing in Episode I, he could have been just crapping or showering slowly, anything, and I would have loved it. But, at the same time, I just remember walking out and thinking about the pod racers and [thinking] that was terrible. This kid can't do that!

Sam Huntington: I didn't care for it. Honestly, it wasn't just the expectation thing. I am a tremendous fan of the older films, but I don't think it really had anything to do with that. I just think, stand-alone, it didn't sit well with me. But a lot of people did love it. It's different strokes for different folks. 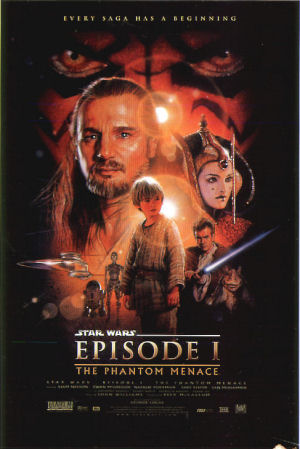 Kyle, what did you have to do to secure Lucas' endorsement or approval for what you wanted to do?

Newman: We were scared at first, because we weren't sure. We were going to this guy, and we were asking for a lot, so we were like, "Let's put together everything that we need. Let's make the best possible presentation." [Producer] Kevin Spacey made the phone call. The people at Lucasfilm read the project and saw that it was very reverent; it was a love letter to Star Wars. Yeah, it pokes fun at some things, but it's all in fun. I think they're at a position, too, in their history where they realize there's no more movies, and it's the fans that are keeping Star Wars alive until there was new TV shows. It was in that window that we approached them, where there wasn't a TV series and there were no more movies, so it was like "Here's a way to keep Star Wars being talked about in the media."

So we had to make a list of everything for them just to show them "This is how detailed we're being about it, and even though we don't need permission for it, here's the references." We're going to use the "scum and villainy" line. You can do that stuff, but we just wanted to show them the breadth of it, and they were cool. I think once they trusted us that we weren't trying to slam them or criticize their fan base and were embracing it, they were cool.

One of the things a lot of people are curious about is how the film ends, since there is such a big debate about how good Episode I is.

Newman: That was a big part of our discussions. [Producer] Matt [Perniciaro] and I had this philosophy where it wasn't about the movie, which is kind of a message that we worked into the film. It's the journey, it's the friendship, and it's really about these guys as opposed to it hinging upon whether or not you liked Episode I.

We take a few jabs at Episode I, like we threw a Jar-Jar joke in there, and there's obviously that last line. But for me it was trying to set the movie in a special time in '98 when it was all about the anticipation. No one knew if it was going to be good or bad, but what they were excited about was the buzz that something was coming. I didn't want to get into the Episode I debate, [but] the movie's not about Episode I. The movie's about friends going on a journey and doing something for another friend. Star Wars is the vernacular, it's the way they talk, but it's not necessarily what it's about.