The Final Destination, the fourth film in the series, goes a little bit further in its efforts to kill victims in shocking, complex and creative ways (spoiler warning for anyone who wants to preserve the surprise of each unique kill!): One racist character gets a quite literal comeuppance when he meets his demise.

The character, credited only as Racist (Justin Welborn), is all set to burn a cross on an African-American's lawn when death conspires to get him. The racist's death mimics a vicious tactic used by lynch mobs in the south's conflicted history. Director David R. Ellis was concerned this kill might have gone too far.

"That was a bold scene, and I don't know if people are going to embrace it or not," Ellis said in an exclusive interview last week in Beverly Hills, Calif. "Our audience is made up of a lot of African-Americans and a lot of Latinos. So far, at one test we had, they were cheering and hooting when the guy [died in a specifically appropriate way]."

Screenwriter Eric Bress conceived the scene as a change of pace from the usual Final Destination deaths. In the series, innocent victims struggle to stay alive after escaping a horrific disaster as death's plan finds them in other ways. Usually the characters are just in the wrong place at the wrong time and presumably don't deserve to die.

"I noticed that one thing you never got to see was a character you hate getting killed," Bress said in a separate interview with a group of reporters. "It's all people that you are introduced to that you're supposed to care about, and it's sort of a fine line. Do I care about this person, or do I want to see the most violent death I can see as an audience member? We thought, 'Why not have an incredibly hated character, just a hateful person?' So we came up with this Racist. Because this franchise is known for its sort of tongue-in-cheek irony, we talked on the phone about 'What better way can this guy go out than the way he dies?' It's such an appropriate ending for this person."

Lest the horror film overstep its bounds in trying to offer a little social commentary, the filmmakers made sure to score the death with an ironic song: War's "Why Can't We Be Friends," which plays while circumstances conspire to accidentally kill the Racist. 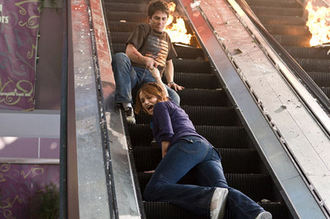 "The choice of the song in there tried to lighten it up," Ellis continued. "'Why Can't We Be Friends' [means] why can't we all just get along, like Rodney King said. So I don't know, I think the decision on that scene's going to be different in every part of the country that it plays."

Producer Craig Perry was also sensitive to touching on racial violence in the film. He agreed the song was key to the scene's tone. Earlier choices, even more specific to civil rights, gave way to the more poppy tune.

"We went through a lot of different versions of what would play or not play," Perry said. "One of the things that didn't get through was 'We Shall Overcome,' which really put a spin on it that was kind of amazing, but that didn't clear. It was written for the civil rights movement. The guys are still alive. They didn't feel it was the right forum, which is fine. Ultimately, we figured 'Why Can't We Be Friends' was a little bit more appropriate and not as loaded, if you will. We felt really happy with that alternate. If you listen to the lyrics, it's dead-on for what's really happening there."

Ellis was more concerned about scenes establishing the Racist's character. At a memorial for the victims of an initial race-track disaster, Racist hurls racial epithets at security guard George (Mykelti Williamson), whom he blames for his wife's death. (In the credits, that character is listed as Racist's Wife.)

"I had more of a problem with the scene that's at the memorial when he says the N word," Ellis said. "I just was really uncomfortable with that. Everybody felt that we needed that to make his death a rewarding death. He needed to cross the line so much, like a lot of people do, whether they're prejudiced of race or whatever they are, to make the death pay off."