How Haley and Morgan found the dark heart of Watchmen

In the alternate-universe 1985 New York of the movie, Rorschach is a near-psychopathic costumed vigilante who investigates the murder of Blake, setting in motion the events of the film.

Is the new Nightmare's Freddy a pedophile? Or innocent?
Nightmare on Elm Street guide: 6 ways to kill Freddy

From his troubled childhood as the son of a single-mother prostitute to his early encounters with child murderers and other criminal scum, Rorschach has evolved as a vigilante with a black-and-white sense of justice, which he brutally administers with his fists.

Blake, by contrast, is a charming and cynical hero with a misogynistic streak and a fluid sense of ethics who revels in violence and is not unwilling to throw in with corrupt government officials.

Both spoke with reporters last week in Beverly Hills, Calif. Following is an edited version of our interview. Watchmen opens March 6.

Jackie, could you talk a little bit about playing this character who's, he's so complex and so deep and yet almost has this sort of view of the world that's only in black and white.

Haley: Playing this guy, it was literally like gazing into the abyss, you know? For months. ... He's just such a tweaked individual. He's the guy that's been absolutely guided by his upbringing. ... His mom was incredibly neglectful, ... as a prostitute and as an alcoholic and as a drug addict. All of her behavior seemed to stem around her self-centered needs. And she would justify those self-centered needs as though she was doing her best ... to provide for young Walter. And I think that he could see that.

That type of behavior is incredibly gray and complex. And I think everywhere in this world, he would see that kind of self-centered behavior continually justified and excused by ... the complexities in this world. And I think at some point in time, he just absolutely needed this black-and-white sense of things so he can survive. ...

I don't agree, you know, with all of his morals, but there is something oddly admirable about his absolutism and about his no-compromise standpoint.

Can you both talk about living with such conflicted, dark impulses and what that does to you as an actor?

Morgan: ... I've played ... bad guys before. [But] the Comedian was a little bit rougher. ... What he does to women in this ... If I'd been ... shooting at a guy, not my pregnant girlfriend, I would have reacted much differently. ... That, and ... just the brutality of the rape scene. I could get easily into the Comedian's head and do all the stuff I needed to do. I'm not a method actor. I go home, and I'm fine. ... I don't need to act like a jackass or an ass--le all day to do that. But I found that filming, especially the [rape] scene with Carla [Gugino, who plays Sally Jupiter], that ... was rough. ... In doing take after take where you're smacking a woman in the face, it's hard to make excuses as an actor for that, that brutality.

And everything the Comedian does: ... He talks about staring off into the abyss. The Comedian was the abyss. He's just gone. ... He just doesn't get it until it's way far too late. ... So there were days that were hard. ... There were just days when no matter what you did, they were going to be hard. The majority of the time, though, you know you're making a movie. You want to be faithful to the material, and you want to be on it as an actor, but, you know, some days were hard. 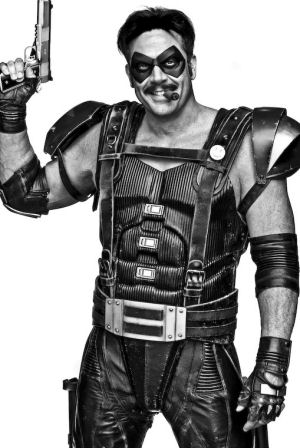 Haley: ... Playing Rorschach, ... I'd find myself isolating a lot in my apartment in Vancouver. And I would find myself ... continually trying to ... put up that filter of Rorschach, ... the way he sees the world. ... I think it's literally ... affected the way I see the world. ... I'm a little bit more cynical. ... We always try to find, like, the beauty in humanity and the human condition. And after staring at it so long through his prism, ... the more ... I see the self-centered [nature]. ... It's almost like the human condition is selfishness and self-centeredness and greed. ... And the world seems to be bearing that out right now. ...

Jackie, talk about what it's like in a character when you don't have a face for most of it.

Haley: It's scary, you know? It's a challenge. I think at first it's just ... "Oh, gosh, I'm gonna get this awesome break. I'm going to be in this cool movie, and I'm gonna be covered the whole time." So it's like, it's scary, because [your face is] your main tool ... to convey what's going on. So it's kind of this scary process of ... covering that tool and going for it. But, at the same time, when you're playing Rorschach, there's something incredibly motivating about putting that stuff on. So I think that at a certain point I just really needed to embrace that. ... I just kind of worked internally and let the outside take care of itself. Every now and then I'd look at the monitor and realize, "OK, I need to animate the suit a little bit. What I'm feeling there isn't conveying at all." ... [But] it seemed like whatever was going on internally usually seemed to be coming through somehow.

It seems like when you do cover your face, your voice becomes all-important, and finding his voice in particular, because it's distinctive even in the graphic novel, you get a sense that it's distorted. ... Can you talk about planning his voice?