How Happy Town is like Twin Peaks. Or not

You'll meet a bunch of kooky, eccentric and sometimes scary characters on ABC's new mystery series Happy Town, but perhaps none odder than Sam Neill's resident movie buff Merritt Grieves, who runs a memorabilia shop and hangs out with the widows at the Meadows Boarding House.

Happy Town has drawn comparisons to Twin Peaks, David Lynch's surreal 1990 series about a small town, but the Australian New Zealand actor said Haplin is more like a town you'd recognize in a TV soap opera, though a bit off. "I think someone said this is Peyton Place on acid," Neill joked. "I don't know what acid is, so I don't know what they were talking about."

In Happy Town, the police in quaint Haplin, Minn., try to solve a series of murders that may have been committed by a supernatural killer. Should they be questioning Grieves? "Grieves is after answers as well, but there are questions about Grieves, too, that need to be asked, to which he could probably give you an answer," Neill said in a phone interview on Monday. "I know quite a bit about Grieves and what I can say is that not all is what it seems. He has secrets to know." 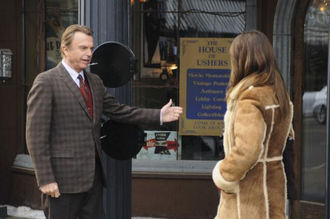 Over eight episodes of Happy Town, Neill has learned some of Grieves' secrets. He gave us some hints about where to look for the show's clues. "It's not coincidental that he's a movie buff," Neill said. "He particularly likes black-and-white movies. He's probably based his whole life on being Claude Rains or James Mason or someone like that. There are clues that turn up all over the place in this show, but it's not going to drive you crazy."

Another clue, Neill suggests, is that this suspected "Magic Man" killer may be a misnomer. "If you need a clue, I would take the supernatural elements with a certain amount of skepticism," Neill said. "Look, it's basically a murder mystery—more than one murder, too—in a small town and a cool bit of writing, it seemed to me."

There are a lot of mysterious people in Haplin and a large ensemble cast. The episodes dealing more with Grieves' secrets come in the middle of the show's current run. "I think probably episodes four or five, I forget which episodes are which, but we all get to have some pretty big moments at various times through those eight hours," Neill said.

Neill added that Happy Town is not all serious, but its sense of humor comes from a dark place. "I like the dark comedy aspects of it," Neill said. "I mean, I like mysteries anyway but if they have a kind of macabre edge to them, that's more appealing to me."

Happy Town premieres April 28 and will air Wednesdays at 10 p.m. ET/PT on ABC.