Sam Raimi, who returns to horror with Drag Me to Hell, told reporters that the film forced him to rediscover his indie filmmaking skills after 10 years of big studio movies such as Spider-Man. In one of Drag Me to Hell's sequences, for example, he found himself losing the light, forcing him to cut shots from his schedule to achieve the same effect.

"First I'd panic, and then I would remember the basics are all I ever needed," Raimi said in a group interview on Monday in Beverly Hills, Calif. "I would think, 'Well, what's the point of this scene? What's the core of what I'm after? It's that this character in the story is confronted with this situation; she makes this realization, and that's where the scene ends. And I can get that with a close-up of my actress and a little bit of a lighting effect.'"

In the film, Christine (Alison Lohman) tries to impress her boss by refusing to extend Mrs. Ganush (Lorna Raver) a mortgage. In retaliation, Ganush curses Christine, giving her three days before she's dragged into hell.

The following Q&A features edited excerpts of our interview with Raimi. Drag Me to Hell opens May 29. (Spoilers ahead!)

How did eight shots become one without losing anything?

Raimi: Maybe she was going to come outside and see the sun coming down, and I was going to have a crane shot, and she was going to realize she didn't have much time. With a simple rose-colored gel and a lamp that's being faded up and her coming into a close-up, she can look off into the direction of the light, suggest she's seeing the sunset, a little bit of wind with help with the idea of the setting sun, and she'll make a realization in her eyes: At that moment, the camera will move in a little bit to underline this realization, a bit of fear will come upon her as she realizes she doesn't have much time as the light is dimming, and she exits frame. With that shot, I remembered I can get everything I needed that I thought I needed eight shots to get. It was invigorating. It never should have been those eight shots anyway.

Why did you choose the old Universal studio logo to open the film?

Raimi: Well, the reason that logo was there was the opening scene takes place in 1969 in Pasadena. My editor, Bob Murawski, thought it would be cool and appropriate if we started with a logo from that era as a way to say, "This is not a flashback. You're in 1969, and here's where that opening scene is." That was really why we started with that. Plus, we think that's a really cool logo. Love that old Universal logo.

Were you just having a blast making Drag Me to Hell, flexing your old horror muscles? 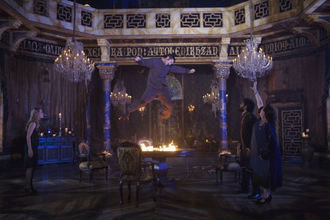 Raimi: Yes. It was not even flexing our muscles. It was really just a team of entertainers and artists and technicians coming together. I believe having a really great creative collaboration ... all the crew members really contributed to this story, and we were under a very tight budget and time schedule, not for most filmmakers, but for me it was short, because I'm very slow with the way I work. Everyone contributed. I think everyone understood that we were making a fun entertainment for people. At least, that was our goal. We're going to try to make it a fun, spooky blast of a film for people. It was really clear that we weren't making an art picture, and everyone really got into that. I had a wonderful time.

Isn't there an artistry to screen violence?

Raimi: There can be, yeah. It's just that my process is so, like, "put this sequence together." Then I really want to sit in the audience and see how they react to it. If this part is slow, if they're not reacting, I realize, "Oh, they don't need that bit of information." I take it back to the editing room, I cut it again, and I show it to them again, and now they like something. Something's kind of funny. I have a little more of that shot, I'm going to add a little tail to that shot and show it to them again. That's really my process. You can call it an artistic process, but I don't know if everybody would. It's more like a tailor, in a weird way. It's a lot of different things. Maybe it's artistic.

Were you pushing the PG-13, or did you not know what you were aiming for?

Raimi: No, I knew I was rating for a PG-13. I definitely, when I was writing the picture with my brother Ivan, didn't want to rely on what I had relied on in the previous horror films, the Evil Dead films, which was outrageous amounts of violence, blood and gore. I wanted to go in a slightly different direction with this one, so I said, "Let's try not to have any of that if we can, blood and violence and gore." Obviously, there's going to be some violence in a horror picture, and a little bit of blood. But more like a nosebleed than gore. We tried to make up for it for the kids with buckets of slime.

Was that a tough choice in a marketplace that supported Saw and other graphic movies?

Raimi: No, I didn't go in that direction to avoid any trends. I just wanted to do something different for myself, because aware of what I had done before and trying to make it slightly different in a few little ways. That was one of them.