David James Elliott told reporters that his latest project, the upcoming SCI FI Channel two-night movie event Knights of Bloodsteel, is about as far removed as possible from JAG, the television military drama that made him famous.

Knights of Bloodsteel is set in Mirabilis, a world dependent on the rare metal bloodsteel for its magical power. There's little bloodsteel remaining, however, and the evil Dragon Eye (Mark Gibbon) has set his sights on claiming the remaining supply. That leaves the elf wizard Tesselink (Christopher Lloyd) to call upon a quartet of everyday people to save the day. Among them are an elf bounty hunter (Natassia Malthe) and a human vigilante named John Serragoth (Elliott).

SCI FI Wire was on the line late last month when Elliott spoke to journalists in a conference call. The movie premieres this Sunday at 9 p.m. ET/PT, with the second half airing the following Monday at 9 p.m. The following are edited excerpts of the call with Elliott.

As an actor, every job is make-believe, but are there notable differences working in the fantasy genre, or does it not really matter if there are elves on set?

Elliott: Well, certainly the dialogue is different on the set. Everything is different. Notable difference: ... We look completely different than I did on JAG, for instance. We're dealing in a fantastical world with different values, and ... there's swordplay. I've worked with swords before. It had been a little while since I had, and I had a little mishap one day. ... I almost lost my eye. Whenever you're fighting with swords—especially real swords, or even swords that are just not as sharp as they might've been in the day—they're still pretty sharp, and somebody is swinging them with some vigor. You're always on the edge of a mishap, and I had one of the swords slice through my eyebrow and just miss my eye. But that was the worst. 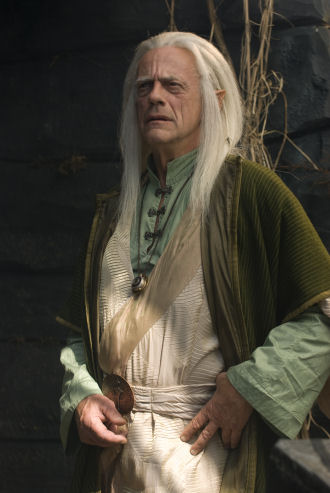 What was it that actually interested you in the project? The project as a whole? The role?

Elliott: I grew up a fan of the fantasy genre. I read Tarzan and Conan the Barbarian books. I always found it to be a fun thing to do, and it's certainly a great departure for me, having not done anything like it on film ever. I was sent the script, and it was really well written. And I was looking for a job. So all those things combined.

Do you think people will be surprised to see you in a fantasy project like this?

Elliott: Oh, I'm sure. It's a funny [town, Hollywood]. I was talking about this the other day. You know, they go, "Wow, can he do anything else?" You go, "Well, I just, ... I mean, I'm an actor." I've done many roles, but most people know me from JAG, so I guess maybe it's human nature to assume that you're only capable of playing a military man.

You mentioned the swords, but in general how physical a shoot was Knights of Bloodsteel?

Elliott: I loved it every day. I loved showing up every day. It was a pretty physical shoot. We were tramping through the forest, and we were all over the province of British Columbia. There was a lot of swordplay and action sequences. But it was good fun. And the cast, we all got along very well. So it was a nice deal. The crew were great. I just had a really good time, and the weather was outstanding, which is certainly not always the case in British Columbia. So, you know, the fates smiled on us.