Tag: James Franco
Tag: rise of the planet of the apes

Rise of the Planet of the Apes wound up being one of the more pleasant sci-fi surprises at the movies this year, but it almost had one more surprise that might not have gone over so well. According to a Twentieth Century Fox executive, star James Franco's character Will Rodman almost didn't live to see the end of the flick.

Speaking at the Visual Effects Society Production Summit over the weekend, Fox's post production guru Ted Gagliano said that the death of Franco's character was filmed and in the movie until a month before the August release, when Franco and co-star Andy Serkis (who played the lead ape Caesar) were called back to re-shoot the scene where Franco bit the dust.

If you're wondering how it would have happened, take a look at this snippet from the script, which reveals Franco dying for the ape love of his life. 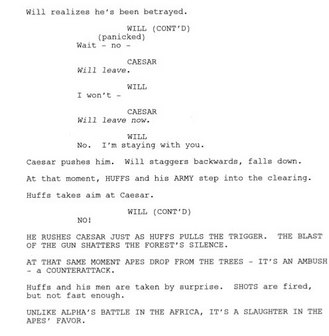 Of course Gagliano calls the decision to spare Franco a creative one, but there's always the sequel to consider, as well as that alternate ending tag for your DVD release.

"The other thing we really want to institutionalize at Fox for these after markets, is the importance of alternative scenes and supplemental material," Gagliano said. "For example, we thought James Franco's character should die (in Apes), so we are going to sell (the alternative clip) down the road."

So, if you're just really not a James Franco fan, you can watch him die when Rise of the Planet of the Apes hits DVD. It sounds like a very corporate Hollywood decision-making process, but honestly, would we have liked the flick so much if the leading man snuffed it at the end?

Tag: James Franco
Tag: rise of the planet of the apes