How Johnny Depp made his Hatter mad ... and what's 'futter-wacking'?

We love when Johnny Depp plays a weirdo, and the weirder the better—a dude with scissors for hands, a sun-fried pirate—and give Depp a character with the word "Mad" in his name and he could go anywhere. But as the Mad Hatter in Tim Burton's upcoming Alice in Wonderland, Depp said he actually imposed some restrictions on himself.

"The great challenge [was] to try to find this guy and not just be a rubber ball you heave into an empty room and watch it bounce all over the place," Depp said in a press conference over the weekend in Hollywood. "Just to find that part of the character, but also a little bit more of history or gravity to the guy."

Doing a little research, Depp found out why old-time hatters actually did go mad. It wasn't just an expression. "There's the whole hatter's dilemma, really, which was where the term 'mad as a hatter' came from," Depp explained. "The amount of mercury that they used in the glue to make the hats and everything was damaging."

Carroll knew this, too, and he buried hints in his text, which Depp uncovered behind passages. "Like, 'I'm investigating things that begin with the letter M,'" Depp quoted. "That took me through a whole stratosphere of possibilities, and doing a little research, [I] discovered that the M is mercury." 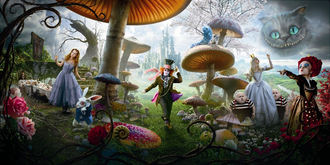 So what does this all mean? It means that the Mad Hatter contains the full spectrum of emotion that any bipolar patient has, Depp said. "He can go from one second being very highfalutin' and a lot of levity, and then straight into some kind of dangerous potential rage, and then tragedy," Depp said. "It was interesting. Trying to map it out was really interesting."

It wasn't just the Lewis Carroll legacy or the actual plight of hatmakers that Depp explored. He also had his own legacy of memorable movie characters to keep in mind, and his Mad Hatter couldn't be too much like Edward Scissorhands or Willy Wonka. "Especially because I've played English a number of times, I've used an English accent a number of times, so it becomes a little bit of an obstacle course to go, 'Oh, that's teetering into Captain Jack-ville' or 'This one is kind of teetering over into Chocolat or Wonka.'"

Depp went to great lengths to make sure the Mad Hatter looked and sounded different from any character he's ever played before. He also moves like no one else. The Mad Hatter does a dance that could exist only in a surreal Wonderland, moving his legs and feet in unnatural rhythms. They call this futter-wacking.

"The happy dance was something that Tim had a very curious vision for," Depp said. "I can futter-wack with the best of them."

Futter-wacking is no freestyle exercise. The movements were carefully choreographed, even more so than a standard dance number. "We had to treat that like a stunt," he said.

What do you think of Depp as Carroll's Mad Hatter?