Justin Long, who plays the boyfriend of a cursed woman in Drag Me to Hell, told reporters that he took his supporting role seriously. Long, who is perhaps best known as the "Mac" guy in Apple computer ads, fought his own temptations to draw attention to himself in his scenes with star Alison Lohman.

"Normally, my instinct would be to just kind of run with that and try to come in and steal the scene or try to do a thing," Long said in a group interview on last week in Beverly Hills, Calif. "I had such respect for the story and for my place in the story, I made a concerted effort to step back. This is Alison's movie, and I'm facilitating her character, really. So I hope I've done that and I'm not too boring. You're like, 'Yeah, you did it. We didn't even know you were in it. You were window dressing.'"

In director Sam Raimi's horror movie, Long plays a psychology professor itching to take his girlfriend (Lohman) home to impress his parents. Little does he know that the weekend getaway coincides with a curse that will put a damper on the family reunion. The following Q&A features edited excerpts of Long's interview. Drag Me to Hell opens Friday.

Did you ever want to be the one getting cursed to hell?

Long: Yeah. While we were shooting it, I was torn. As much as I want the blood and the prosthetics, because I love that—it's the coolest, and I regress right back to being a kid and playing in the yard—the tired, lazy 30-year-old in me was like, "Wow, thank God I get to go home, and I have some days off." In fact, I shot a small part in another movie sandwiched in the middle of shooting this movie. I got to sleep, and I got to take off myself and spend time with friends and girlfriend.

So at the time I wasn't all that upset. Now, seeing the movie, I'm like super jealous and wish to God I had been a part of more of it. It was also another phenomenon. Oftentimes I see something that I was cut out of. I remember being cut out of Anchorman and just being devastated. I had, like, two little scenes, and I didn't know until the premiere, and it was heartbreaking. Obviously there's a vanity. I'm an actor, I'm vain and there's a level of narcissism, and you see work of yours [cut] and you're like, "Oh, man! I can't believe that was all for naught!"

But we really believed it when you said it.

Long: Well, good, that line was infused with a lot of work. But when I watched it as an audience member, I was so excited I was in it in a limited way, because I got it. I was along for the ride, and I don't want them cutting to me lecturing the class on some Freudian problem. I wanted to stay with Alison. That's where the fun Sam Raimi stuff is. I was lucky I got to go home and sleep, but she's going to have this forever, and it's such a great journey to capture on film, and with such a great guide. I'm lucky to be involved at all. 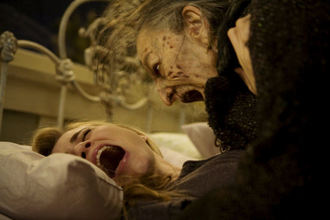 Were you able to improvise anything, in a dramatic way instead of comedically?

Long: I tried to. Sam was the most collaborative director I've ever worked with, which is strange, because he's so meticulous with his storyboards and everything's so thought out. He's very stylized and prepared, but he allowed a lot of room on the day, and before I did a lot of work with him and his brother Ivan on the script and on the character, a lot of which didn't make the final cut.

Beforehand, I had started writing myself, and so I kind of wanted to use whatever improv skills and ad-libbing ability that I had, kind of wanted to use it in the planning process and the preparation stage. So we did some and then worked it into the script, but for the most part I tried to kind of hold back that impulse. I had just done He's [Just] Not [That] Into You, and the director of that kind of broke me of that instinct a little bit.

It's sort of a safety net for me, to go to that improv place. I've worked with a lot of the Judd Apatow guys, and even on a script like [Live Free or] Die Hard, [in which Long co-starred with Bruce Willis,] it's not there, so they rely on you to do it. A lot of the movies I had done were like that, where the script wasn't necessarily fleshed out, and they invite that, they welcome it. But for this I knew my role. My function was supposed to be just a supporting character to Alison, and I was to stay away from the goofy stuff and the overly comedic stuff. So I tried. I did kind of hold back a little bit, and Sam was a good barometer. I certainly wanted to impress him and to do justice to the part he wrote, so there was a lot of holding back.

Did you ever see Sam Raimi lose it?

Long: Never, never. And it was funny, [because] he had occasion to at times. Even when he fully could've and people would've been like, "Well, that makes sense. That person messed up," or "That shouldn't have happened," he had a way about him. I don't know what it is. I have this theory that he internalizes those moments to the point where they build up in him and he releases them in these movies. Like he's so nice that the darkness has to go somewhere, and he just puts it somewhere, and he puts it on the screen. I don't know where it comes from.

I said that to Ivan the other day, and all the [Raimi] brothers are like that. Ted and Ivan, they're like the nicest, kind of goofy, fun-loving guys. I was shocked at how reposed and level-headed he was, even in the face of [things where] any other director would've just lost it.