When he turned 4 years old, hearing-impaired Anthony Smith decided he didn't want to wear his required Blue Ear hearing aid anymore—mostly because none of his favorite superheroes wore them. Well, that was until Marvel turned him into a hearing-aid-equipped superhero.

Anthony's mother Christina D'Allesandro e-mailed Marvel with her problem and asked if there was anything they could do to help.

Who were those guys that Ronin was killing in Endgame?
Hawkeye is the most important Avenger

"I am likely to get stuck in your spam filter," she wrote. "But you never know. Have a great day."

Luckily, her superheroic dilemma was heard by Marvel editor Bill Rosemann, who dug up a copy of the 1984 West Coast Avengers #1, which featured Hawkeye using a hearing aid after taking a shot to the ear during a rescue mission.

"Print that out and show it to Anthony and tell him that superheroes definitely wear blue ears," Rosemann wrote to the family. "And he can become an honorary Avenger by wearing this."

But, that wasn't all. Before long another e-mail arrived that showed off Marvel's latest superhero: Blue Ear, who uses a hearing aid to track down trouble. 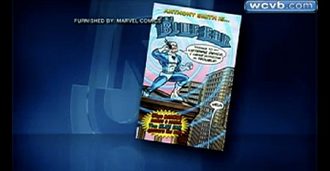 "Thanks to my listening device, I hear someone in trouble," Blue Ear says on the cover.

Now, even when Anthony doesn't want to wear his hearing aid, his mom reminds him of his mission.

"I tell him he has to hear people calling for help," Christina said. "He gets the whole connection. He's loving it."