Early teaser trailers for the upcoming sci-fi action movie The Book of Eli show star Denzel Washington kicking post-apocalyptic butt, but co-star Mila Kunis revealed that her character gets her share of the action.

"I get to flip a car," Kunis said in a group interview over the weekend in Beverly Hills, Calif., where she was promoting the comedy Extract. "I get to throw a grenade into a convoy of cars and explode them. I get to do other fun things that I can't talk about. The trailers are so small in comparison to how cool the movie is. I've got to tell you, the movie is really, really cool."

Best known for comedies (TV's That '70s Show and last year's Forgetting Sarah Marshall), Kunis has also played her share of kick-ass action heroines, as in last year's Max Payne, in which she played assassin Mona Sax. In Eli, Kunis said her character has more dimension.

"I think in Max Payne she was very much just that," Kunis continued. "She was an assassin, and you see what you get. In Book of Eli, it's a very real character that has to fight to survive in this specific type of world and learns how to survive versus being placed in front of you as this one person. You get to see her grow. It was a great, great part."

Set in the aftermath of a global disaster, the movie centers on Eli (Washington), who travels an American wasteland protecting a book. Villains try to acquire the book to use its knowledge to rule what's left of the world. Kunis plays Solara, a young girl awakened by her adventure with Eli. 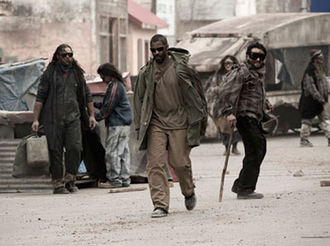 "My character in that is pretty awesome, I have to say," Kunis said. "She starts off very young, very naive, very sheltered, but also very hungry to learn about life. What can I say? [She] gets inspired by Denzel Washington's character and goes on this journey with him throughout the film. It takes place in maybe four or five days, and she grows up so fast and so quickly and almost becomes a woman and takes over. She was a beautiful, beautiful woman to play."

The Hughes brothers, Allen and Albert, directed The Book of Eli. Kunis was a fan of their work from Menace II Society and the documentary American Pimp and admired their process on set.

"They're very much like one brain, but one completes the other," Kunis said. "One is incredibly technical and sees things while shooting, sees how the edit's going to go and sees the whole entire film in his head," she said. "One is more about the emotion of the scene and more about the purpose of things. But ultimately they discuss things amongst each other, after a take, and then they send one off. You never really get two at the same time to talk to you about notes. They converse, and then one gets sent off. Which one you get is like a surprise. It's like, 'Hmm, who's going to come talk to me today?' But it's fun. They're great working together. They're both incredibly smart, really, really talented guys, and they have an amazing vision, and they kind of fill each other's gaps."