How Ponyo didn't get lost in translation

"I don't ever want the English version to change anything in Miyazaki-san's story," Lasseter said in a press conference last month in Beverly Hills, Calif. "So the first thing we do is we get a direct translation. Even though the sentences will be kind of hard to understand, I just kind of want to know exactly what's being said. Then I work with Steve Alpert at Studio Ghibli, and we'll sort of rearrange the words to be fit into kind of sentences, so we kind of know what's going on. That's our starting place."

Then screenwriter Melissa Mathison (E.T. The Extra-Terrestrial) wrote the English-language adaptation of the script. "The goal is to make the film for American audiences, just for the language to be very natural," Lasseter continued. "You don't think of this as being a dubbed Japanese film. That's not what we want. We want everybody to just get swept away with the story. The goal is really [that] the lights dim, the audience in America's taken away and you get swept away by this beautiful story and the visuals."

As suggested in the film Lost in Translation, Japanese dialogue sometimes takes longer to say than its English translation. That creates a problem for animators, as a character may be shown speaking for longer in Japanese dialogue than would be required for English.

"We try very hard, working with the actors, to get the lines of dialogue to fit with the right mouth movements," Lasseter said. "You don't want to have someone sit there talking and nothing's coming out, or saying a whole bunch of words and there's no mouth movement. You want to try and fit it in there. So we work really hard to make it seem as natural as possible." 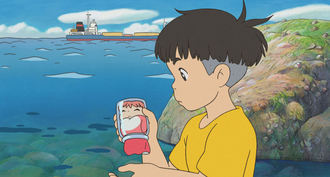 Sometimes the English producers have to dub brief lines for characters to explain to American audiences things that would be implied for Japanese ones. In the interest of avoiding spoilers for Ponyo, Lasseter cited an example from Spirited Away. When a character came upon a bathhouse, a familiar site to Japanese audiences, Lasseter had the line "Oh, a bathhouse" dubbed so that Americans would be up to speed.

Oh, yeah, they also cast English-speaking actors in Ponyo, including Liam Neeson, Cate Blanchett, Cloris Leachman, Matt Damon and Tina Fey. "In casting of the voices, we really aimed high on this one," Lasseter said. "What's nice is everybody, as soon as they found out that it was a Hayao Miyazaki film, they were like, 'Yes, I want to do this.'" (Or, in the case of Fey, "I want to go to there.")