Since it was announced that producers Roberto Orci and Alex Kurtzman (Star Trek) were developing a movie based on the View-Master toy, the film has been a punch line for jokes about Hollywood selling out.

But Orci and Kurtzman—who also wrote the two Transformers movies—defended the idea, arguing that there may be a compelling character in Mattel's 3-D picture viewer.

"It depends on how you define character," Kurtzman said in a group interview Thursday in Pasadena, Calif., where he was promoting his Fox series Fringe at the Television Critics Association's summer press tour.

The View-Master is a binocular viewer that uses circular discs of picture cels to create 3-D images. Orci assured Master viewers that the duo entered into the movie adaptation with noble intentions. 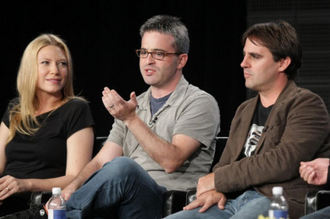 "It wasn't born in sin," Orci said. "What happened is we have a friend who wrote on Fringe, [Brad Caleb Kane], ... who had a pitch that he wanted to do of this movie. He wasn't even thinking of View-Master. Then our company got a look at it, and [we] thought, 'We could actually connect this with View-Master who we know happens to be looking for someone.' So it wasn't like, 'Let's come up with a View-Master movie.' There was a great idea out there, and it was perfect to marry with View-Master."

Cynicism toward View-Master feels like familiar territory for the writing partners. Kurtzman recalled the duo's first dealing with fanboys. "It's funny, when we signed on to do Transformers, there was this incredibly cynical reaction to the idea of 'Oh, it's just a toy movie,'" Kurtzman said. "I would hope that by now people would know that we would never walk into something if we didn't actually have a real story behind it. Certain toys should never be movies, and certain toys should be. I think we've spent a lot of time talking about the difference between them."

Kurtzman added that the recent wave of 3-D films could benefit View-Master. "Oh yeah, we'd love to do it in 3-D," Kurtzman said.

View-Master is in development at DreamWorks.