Ricky Gervais' last movie Ghost Town took its sweet time setting up the premise of a man who can see dead people, and the comedian isn't wasting time with his next project, The Invention of Lying.

According to Matthew Robinson, Gervais' co-screenwriter and director, the fairly self-explanatory film quickly sets up a convincing fantasy world in which Gervais becomes the first person to tell a lie in a world where everyone else tells the truth all the time.

"In terms of the logic and stuff, the story moves pretty quickly, and about every 20 minutes it reinvents itself," Robinson said in an exclusive telephone interview last week. "The first 20 minutes is watching this loser inhabit a pretty depressing world, and then he stumbles upon this ability to lie, and he does what anybody would do—he does basic fantasy-fulfillment stuff. He tries to get laid, he tries to get money, and he lies to his boss and tries to get a better job."

Robinson is a first-time screenwriter and director, but he said that the film's plot wasn't mere wish fulfillment for his own aspirations. Rather, it was a setup for something more inventive and, he hopes, substantial. "Those are the first things anyone would do, and then once you've sort of dealt with those three things, we then sort of switch the whole story," he explained. "He accidentally stumbles on a lie I won't give away, but which sort of sets the world on fire and gets everyone paying attention to him and wanting to know answers. Then, from that point on, it's all about being stuck in this lie and sort of having to write his way out of it with bigger and crazier lies, all the while trying to woo the girl that he loves and seeing if he's going to end up doing it with lies or by being honest."

Robinson added that he and Gervais didn't want the film to resemble an overlong comedy-show bit. "It would be really boring if it were a 90-minute Saturday Night Live sketch of somebody being shocked by people being too honest and then being shocked by somebody lying," he said. "So we really tried to reinvent the wheel every 20 minutes or so and keep it entertaining without getting bogged down in the logline of the film." 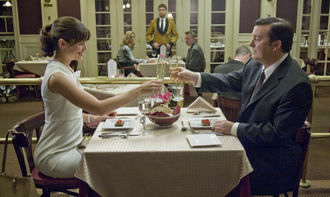 Robinson admitted that the story's genesis was as a short movie. "I sort of woke up one morning with a Twilight Zone idea of my own which I could have sworn was a real Twilight Zone episode, or it should have been. It's just a world where lying didn't exist," he revealed. "It seemed like such an obvious idea, so I did a little Internet research, but I don't think anybody had ever really done that idea. So I had this idea of what a blind date would be like in a world without lying, and I sat down and wrote that as a comedy sketch for myself. I thought that was funny, but I didn't think there was a feature in there; I thought, at best, it was a good Saturday Night Live skit."

It wasn't until later that Robinson developed the idea into The Invention of Lying (which was original titled This Side of the Truth). "About a year later, I was looking through my archives and trying to figure out what I wanted to work on next, and I really liked the idea, and I sort of sat on it for a few days, and I came up with three or four of some of the bigger scenes in the film," Robinson said. "I felt that was enough, so I sat down and wrote the script, and within a few weeks, through miraculous means, it got into Ricky Gervais' hands. We had never worked together, I didn't know him personally, I was just a massive fan and for the most part wrote the script with him in mind, which I've never really done as a writer before. I just thought it was a role he was born to play, and it somehow got into his hands, and he loved it, and we just started working on it together. He called me out of the blue one day after reading the first 10 pages of the script and said he had to be involved, and I think three weeks later I was in his office in London, writing with him."

The Invention of Lying opens Sept. 25.