How Sleep Dealer is less Hollywood and more outsider sci-fi

Alex Rivera, director and co-writer of the sci-fi film Sleep Dealer, told SCI FI Wire that he wanted to create a science fiction film based on ideas rather than the Hollywood conventions of action. In the film's future, "sweatshop" workers south of the border implant nodes in their arms so that they can "jack in" and work remotely across the Mexican/American border.

"Sleep Dealer has touches of action, but I really wanted this film to stand on the ideas," Rivera said in an exclusive interview on Friday in Beverly Hills, Calif. "There's a feeling that a lot of science fiction, especially the bigger-budget fare, is not going as far as it can intellectually, as far as it can in the realm of ideas."

In Sleep Dealer, Memo (Luis Fernando Pena) has nodes installed so he can work in a Tijuana factory, controlling drones on a construction site in the U.S. remotely. Luz (Leonor Varela), who installs Memo's nodes, uses her nodes to record her memories for sale online.

Rivera sat down with SCI FI Wire at the film's Los Angeles press day to discuss the making of the film and its themes. The following Q&A features edited excerpts of that interview. Sleep Dealer opens Friday.

How rare or hard is it to do a science fiction film that's not all action?

Rivera: I think it's interesting to reflect on why science fiction films are the way they are and why they're so different from science fiction literature. Science fiction films usually take place in a place like Los Angeles. To imagine that, there are always the skyscrapers, the flying cars and so a huge budget. Then you need a huge star, so then you get the same kind of cast of people that inhabit the future, the Harrison Ford, Tom Cruise, Will Smith.

If you're doing an independent or an outsider science fiction where you don't need that huge budget, then you can have different people living in your future. So there's a way in which visualizing the future is connected to the cast of the future and connected to the point of view of the future. With this film as a small-gauge, outsider sci-fi, I think I was able to focus it more on the ideas, less on movie stars and less on big action sequences. I'd say for me, I love the beginning of Blade Runner the most. I love getting to know the world. Then, when I learn that it's just a film about killing robots, it's an amazing piece of work, but it kind of lets me down.

Do you think that's all Blade Runner is about? It's not about the definition of identity?

Rivera: OK, I'm definitely not trying to knock down one of the great cinematic achievements of the 20th century. All I would say is just that Blade Runner, like many science fiction films, in the first maybe 10 or 15 minutes, you get the contours of the world. This is a world where slave robots are rebelling and Harrison Ford needs to retire or kill the slave robots that are rebelling. There are questions about who's a man and who's a machine. That's sort of the philosophy of the world, and it's revealed in the first 10 minutes, and then it plays out. There's a series of chase scenes and action scenes.

In Sleep Dealer, the first 10 minutes, you get a tiny bit of the world. You get a little village. You get the privatization of water. Then the next 10 minutes, you get this idea of America, reality TV, drone wars. The next 10 minutes you get a factory in Mexico, the closed border, telecommuting to America from Mexico. So in Sleep Dealer, the structure is like an onion where you're getting new ideas about the world that peel off every 10 minutes or so. That's what I'm trying to say.

Rivera: Well, to me, that's like being compared to the Dalai Lama. It's just kind of crazy, but it's a delight, and I think it's also just a comment that I think there's a real hunger for a science fiction cinema of ideas and a science fiction cinema of real outsider stories. It's a huge, huge and kind of borderline crazy compliment to be compared to Philip K. Dick, but I'll take it.

What were the sci-fi films you fell in love with growing up?

Rivera: My first film that I ever saw on a big screen was Star Wars, and I saw it at a drive-in our Mustang. I fell in love with that film, and then, growing up, it was all the way from E.T. to Blade Runner to, as an adult, one of my favorite films is Brazil. I also loved some of the more outsider or smaller science fictions, like Gattaca. Children of Men recently is extraordinary. Those are films that are all inspirational, but I think science fiction makers and science fiction fans, we need to fill ourselves, fill our minds with things outside of science fiction. 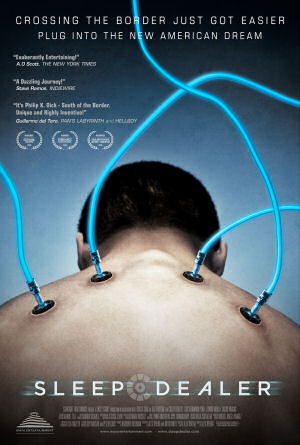 How much do you think about The Matrix and Strange Days when you're doing a film about recording memories and virtual controls?

Rivera: Well, I absolutely thought about and tried to take the best and avoid the pitfalls of many other sci-fi films. One thing about jacking in, we've seen in science fiction many films where people jack in. It's usually Keanu Reeves. Johnny Mnemonic or The Matrix, he's always getting plugs stuck in his brain.

Rivera: eXistenZ, where the plug goes down near the butt, but I love the idea of jacking in in a new way. Since my film has to do with the theme of labor, I said I want to put the nodes not in his brain but in his arms. So if he had five connectors in each arm, I got this kind of beautiful marionette metaphor where these cables were coming from his arm up to the system. So that was a reference to and avoidance of The Matrix and these other films where people plug into their brains. It was saying maybe the future is more carnal, maybe the plugs would go in the body.

In terms of memory, we've seen like in Strange Days and the movie [The] Final Cut, we've seen the concept of recorded memories many times. I've always been dissatisfied. When I close my eyes and try to actually remember my mother's face, for example, what I see mostly are flashing pools of color. I see mostly darkness, and then maybe you can get a faint image to come out in your memory. I wanted to work with the artist to try to do that, to make these memories kind of fleeting images that sometimes came together and sometimes fell apart, that they were always sort of in a pool of blackness. It's not like a video, and I think we got 90 percent of the way there. I'd love to push it further next time around.

Was there a low-tech approach to these high-tech ideas?

Rivera: I'm really proud of the way the film looks, but we barely made it. A lot of it was held together by duct tape, by Krazy Glue, by using mirrors to amplify the size of the set, by pulling in favors from friends on After Effects who could make shots on their laptops. This is a real grassroots sci-fi. Sending it out to the science fiction community, I'm hoping that they will embrace it because of the ideas. It's trying to say something about the world.

Rivera: The key futuristic set in the film is this factory. I was looking at reference photos of real factories, and I counted the workers in the lineups. There were 20 workers by 20 workers in my reference photos. So I went to the art department and said, "I need a factory with 20 workers on either side." They were like, "You're crazy. We can't build that. It's too much. How about 10?" Then they were like, "Well, how about eight?" Then eventually, "Actually, all we can give you is four." So the set they built was only maybe 15 feet deep and could only hold four workers on either side. The first trick that we had to make this space feel bigger was dropping a giant mirror down. Then you've got eight and eight, so you've got 16. Then we put a green screen behind the camera so that in the reflection there was green, and then we were able to shrink the set down in post-production, duplicate it again and turn our four workers into 32.