The idea of turning a beloved Mickey Mouse cartoon into a Jerry Bruckheimer action movie might not sit well with Disneyphiles, but the star of the live-action The Sorcerer's Apprentice assured us that they haven't screwed with the classic original too much. Also, check out the new trailer, above. (Spoilers ahead!)

In the new movie—based on the animated segment of Fantasia—Jay Baruchel plays the apprentice to a sorcerer (Nicolas Cage) in present-day New York. He said he got to do the scene made famous by Mickey in the classic 1940 animated movie, in which the apprentice brings mops to life to help him clean.

"We quite literally pay homage to that scene," Baruchel said in an exclusive interview earlier this month in Beverly Hills, Calif., where he was promoting How to Train Your Dragon. "We do our own 21st-century updated version of that specific sequence with me and mops. Instead of Mickey, it's me. Because it's the 21st century, there's not just mops. There's also dustbusters and vacuums and stuff."

Director Jon Turteltaub didn't just throw some CGI mops together to make a scene. He actually re-created the scene from Fantasia. "When you see this sequence, some of it is shot for shot," Baruchel said. 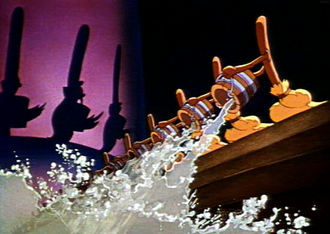 A live-action sequence of living mops sounds promising, with or without dustbusters. But what about the rest of the movie? "We have a pretty sweet car chase," Baruchel said. "There's a pretty amazing scene where a Chinese dragon comes to life and chases me through the floors of a brownstone in Chinatown and just demolishes the thing. Then there's a great f--kin' final showdown in Bowling Green, where the three of us good sorcerers do battle with Morgana the evil sorceress. A lot of energy shooting out of my hands. I got to do a lot of s--t."

That doesn't sound like dancing mops at all. Baruchel said the film took inspiration from Fantasia, then went its own way. "It's more like if the 'Sorcerer's Apprentice' sequence from Fantasia is a seed, our movie's kind of an elm," Baruchel said. "But it is also a straight-up epic action movie. It'll be the best ride at the amusement park."

This movie's sorcerer has turned to human apprentices rather than mice. Baruchel said he still felt a little like Mickey. "My voice, again, is young enough sounding as it is, so I'm always trying to fight against that," Baruchel said.