What do the directors of Star Wars and Jurassic Park have to do with this weekend's apocalyptic angel thriller Legion? Director Scott Stewart got his start as a visual-effects artist at Industrial Light & Magic, working on Lucas' Star Wars: Episode I—The Phantom Menace and Spielberg's The Lost World: Jurassic Park and took away lessons he applied to Legion, which opens today.

Mainly, Legion doesn't subscribe to the new style of handheld camerawork, most popularized in the Bourne films. Old-school masters such as Lucas and Spielberg let you see the action, so Stewart does, too. 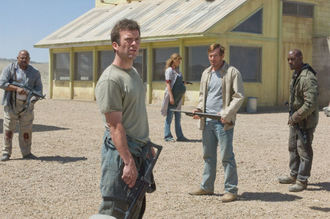 The film's star concurred. Paul Bettany plays the archangel Michael, who defies God's order to his angels to wipe out mankind. On Earth, Michael assembles a stash of machine guns and holes up with the apocalypse's survivors in a remote desert diner.

"There needs to be a story in the fight," Bettany said. "You need to understand cost and consequence and bruise and blood."

"That helped me demystify the post-production process," Stewart said in a group interview Thursday in Los Angeles. "You learn a lot in post-production about how malleable imagery can be. When you're shooting and you're trying to make a schedule, you're trying to get a day. You know when you look at it that it's not quite right right now, but I've got the elements that I need here on this moment. I can move on, and then later I know I can erase that and add that and do that."

Stewart added: "We look at it, and we're like, 'Son of a bitch, it worked.' You kind of know in advance that it's working."