Some days you're just proud to be a nerd. Sure, we like to spend time bickering about movies, comics and TV shows, but when it really matters we can come together and do some pretty cool stuff, like help a little girl get the Star Wars Halloween costume of her dreams.

Katie Goldman is an 8-year-old Star Wars fan from Chicago who earned the nickname "The Littlest Jedi" in fan circles back in 2010, when Star Wars fans from all over the world showed support for her after she was bullied for carrying a Star Wars water bottle at school. Katie's still a rabid Star Wars fan, and this year for Halloween she really wanted to be a stormtrooper.

Netflix exec explains why they'd never bring back Firefly
A year after The Rise of Skywalker, Star Wars fandom creators take the reins

To help her dreams come true, members of the somewhat legendary worldwide fan costuming organization known as the 501st Legion offered to make the costume to Katie's exact specifications. They would craft perfectly fitting stormtrooper armor based on the original Star Wars designs, just for the Littlest Jedi.

"The members of the 501st wanted to make her a Halloween costume that no other child could replicate," Katie's mother Carrie wrote at her blog. "Katie would become a Stormtrooper, as if she had stepped onto the set of a LucasFilm movie."

But then Carrie Goldman started to worry that the cost of this custom costume would be over the family's Halloween budget. She went to 501st members to tell them the scheme might not be affordable, and they said she shouldn't worry about it.

"They wanted to raise the funds for the costume," Carrie wrote, "and in return, they asked if we could donate the costume back to them after Katie outgrew it, so that it could be used for Make-A-Wish kids."

A few weeks later, Katie and her mother drove to nearby Naperville, Ill., to pick up the costume and found a full-fledged honor guard waiting to greet them. 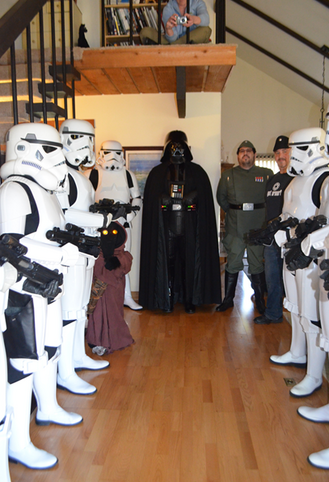 Katie gave the Legion members $5 from her allowance that she'd saved to help cover the cost of the suit, and she even got to meet the people who made the costume possible. Now she's the baddest trick-or-treater in Chicago, thanks to the kindness of some fellow fans. 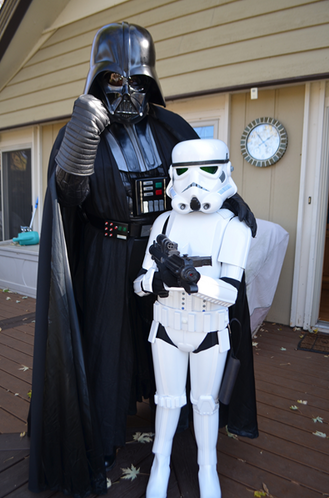 May the Force be with you, Littlest Jedi.