How Street Fighter's bad guys find the fun in evilness

In Street Fighter: The Legend of Chun-Li, the video-game heroine faces off against the villainous Bison, who kidnapped her father. The film's mythology has Bison imparting all the goodness of his soul into his infant daughter. That way he is free to perpetrate his evil corporate schemes unfettered by guilt. His henchman, Balrog, seems to be fine with beating up opposition without any such soul-altering.

Neal McDonough plays Bison in this film incarnation, with Michael Clarke Duncan playing Balrog. The actors relished playing evil on screen and enjoyed reminiscing about it.

The duo discussed which characters they kill in the film in an interview with a group of reporters on Thursday in Beverly Hills, Calif. The following Q&A features edited excerpts from that interview (spoiler alert!).

There's not one redeemable quality of Bison.

McDonough: Yes, there is. That goatee is sweet.

Do you have to like your characters when you play villains?

McDonough: I love every character that I play. Absolutely. I based him after Richard Branson. I based him to be this worldly bon vivant with the great clothing, the best of schooling, everything. This guy did whatever he needed to do and speaks all the different languages, and he's a phenomenal guy. If you're walking down the street, it's like I want to be like Bison, right? Until he does some things, like when he kills Cantana. That was part of his code, though. She failed him, so she had to go, and I wasn't going to allow someone else to kill her. She was like my daughter, so I owe it to her to kill her myself. It's absolutely twisted in our thinking, but for Bison that's just a matter of fact. You never see me lift the eyebrow and [Snidely] Whiplash. It was: Let's stick to the corporate greed of life and enjoy it.

Michael, Was it your idea that Balrog had fun being evil?

Duncan: Yeah, because I didn't want to be the stereotypical big heavy who's mean and growling. I believe that the person who is scarier in a room is the person that smiles a lot and who's big. I'm already big. I have the size, but if my boss tells me to go do something, and I do it with a smile, it's way more sinister than me coming to you saying, "I'm gonna get you." No, I like to do things with a smile, and I was having fun beating people up and destroying stuff.

McDonough: Dude, when you shoot that missile and blow up the building and you're laughing your ass off, that was one of the best moments in the movie. That was awesome.

Duncan: Because it was fun. 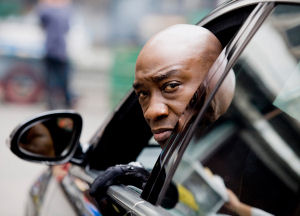 Are you surprised you play so many heavies, since your big breakout was the gentle giant in The Green Mile?

Duncan: See, that's it. That's it. That's exactly why I want to change it. I just want to do something evil so people who are like, "He's such a sweet gentle giant ... " No! Kill, kill, destroy!

Did you have a favorite evil deed?

McDonough: I think, without question, my favorite moment in the film is when I'm beating Cantana, and I turn around, and ... I look at Balrog's face, and Balrog has done some obviously heinous things, but the way he looks at me is like, "Oh, s--t."

Duncan: Because that was cold-blooded.

McDonough: The look on his face was my single favorite moment in the show. There I am just wailing away, they're splashing blood on my face and around the room. I turn around, and I look at Michael. He's just like, "What the f--k is that?"

Duncan: In the movie you think he's hitting the bag like I am, and he's actually beating her to death. When I saw that part, I was like, "Oh, my God, now that's worse than anything I could have ever thought of. I'm not even that evil and diabolical." That was evil.

Neal, did you see Raul Julia's performance in the 1994 Street Fighter?

McDonough: I had never played Street Fighter, and I hadn't seen the original Street Fighter film, either. So when they asked me to do it, I really didn't want to see anything, because everyone spoke so much about Raul Julia's performance and how fantastic it was. Can you live up to that, or can you live up to Bison in the video games? I said to myself, "Make a new spin on it." And I think it really worked. I still haven't seen it, and as soon as the film comes out and I see it in a big theater with everyone, then I'll go watch his performance and probably be happy I changed it. He was an amazing performer.

Were any of the evil scenes difficult emotionally?

McDonough: Those were actually the most challenging. That scene where I'm not so nice to [Chun-Li's] daddy is a pretty powerful scene, because we try to keep it raw and simple and truthful instead of being over the top. I promise this guy that he'd have a chance to say goodbye to his daughter, and I kept his word. Then he had to go, because he's got to go. Bison keeps his word on everything. He doesn't lie. By being so truthful to the character, it makes them so completely twisted to watch. When I was playing it, I played it like the guy next door. By doing so, it makes him despicable, which is great.

Was there even any love for his daughter?

McDonough: When he was a kid, he had all the goodness. He had everything, but then he realized that the goodness wasn't working for him, so he sold his soul and gave all his goodness and fused it all into this baby. The only piece of goodness that was left in Bison is the remembrance of his child. Granted, he kept her in captivity for 14 years, six months and four days. He remembered exactly how many days she's been in prison for, but he thinks he was doing the greatest thing in the world for this girl. Now he's giving her the empire.

Is she really a good choice to run things now?

McDonough: She's my offspring, she must be. We'll figure that out in the next episode.

Well, everyone knows Chun-Li will beat you in the end. How can you come back?

McDonough: Come on, it's a video game.