There is now an entire generation for whom Street Fighter is just a video game: They're too young to remember 1994's Jean-Claude Van Damme vehicle in which the Muscles from Brussels played Guile, fighting Raul Julia's Bison with the help of Ming-Na Wen's Chun-Li.

For this generation, there is Street Fighter: The Legend of Chun-Li. Starring Kristin Kreuk, whom the kids know from Smallville, as the title character, Legend tells the origin of the game's iconic female fighter. Chun-Li takes to the streets of Bangkok looking for her father, who has been kidnapped by Bison (Neal McDonough), training in the spiritual ways of projectile light energy and wire-enhanced martial arts.

At the film's press junket last Thursday in Beverly Hills, Calif., Kreuk sat cross-legged and barefoot on a Beverly Hilton bed. She noshed on hotel-room pistachios, with a pink scarf shielding her neck from the unreasonably chilled central air. The following Q&A features edited excerpts of our exclusive interview. Street Fighter: The Legend of Chun-Li, directed by Andrzej Bartkowiak, opens Feb. 27.

Did you see the moves from the video game and think, "How am I going to do that for real?"

Kreuk: Yes, because I think that they're very unrealistic in nature. Then she says stuff like, "Spinning bird kick," which is funny but really not dramatic. So yeah, I did.

So then you pulled it off anyway.

Kreuk: That's Dion. That's all [action choreographer] Dion Lam. He was really great, and he found ways to make that stuff work so that the fans would still like it, I hope, and it also looks somewhat realistic.

Did they do anything to enhance your Asian features?

Kreuk: Mm-mm. Did I look more Asian, did you think? I think because the makeup artist really got rid of a lot of any of my shadowing around my eyes, it made them look a little flatter. Probably that was it. 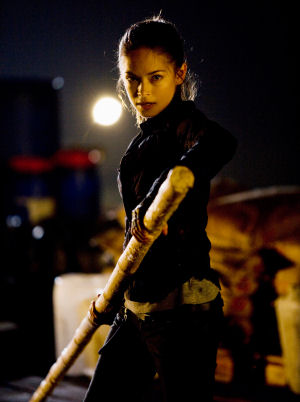 How did it feel to wear the blue dress and have your hair in the buns?

Kreuk: It felt fine. It's hard to fight in that stuff, really hard to fight in heels and a dress, because I was used to having pants, and I could move more and I was more flexible. They made the dress loose on purpose so that we could fit pads in it and do a lot more movement. The buns are cute. I felt like a 2-year-old, but they were cute. ...

Kreuk: I saw some of it on YouTube. I watched some of her scenes with Raul Julia. Very different. ...

What were your thoughts on the stigma of video game movies?

Kreuk: I didn't think about it a lot. I know that there isn't a huge success rate. They've done a lot of female-driven video-game adaptations that have been really successful or not so successful, depending on which one we talk about. I thought that this was different, because there was a story to it, and that was the most important part to me, that there was something that I could grasp onto and understand and relate to instead of just fighting all the way through, because that isn't appealing to me.

You got injured at one point. What happened?

Kreuk: I got punched pretty hard and I got chucked into a low tableside. It's interesting. Dion's stunt guys are amazing, and I could do anything and they would be able to calibrate to my inexperience, but the Thai stunt guys weren't as experienced. So they were in a similar position to me, and neither of us were experienced enough to know when someone was doing something that was a little off timing-wise. That's when you get punched. You see the punch [in the movie].

Which sequence was that?

Kreuk: In the alley fight there's a sequence where he pulls back and swings over Chun-Li's head, and she ducks. I came up too early, and he was swinging hard. The other one is when Chun-Li goes into the table there and then jumps up and then does the dive roll out with the shovel and the stick. He was throwing me too light, and I was like, "It's OK, you can throw me harder." But instead of throwing me harder and across, he threw me harder and down. I don't know if anyone's ever thrown you to the ground before. No one had really thrown me to the ground before, but it's hard to stop the momentum, and I just whacked my head. It's brutal. I hit my head, and I was talking to all the stunt guys. I'm like, "Will this go away? It's tightening, is that normal?" They're like, "Yeah, yeah, yeah. It'll just be a few days. It'll tighten more, and then it'll be fine."

Are you signed for more Street Fighters?

Kreuk: I'm signed for a sequel, I believe, that's it.

Is there any telling whether it would be another Chun-Li story or have her playing a supporting role to a new origin?

Kreuk: They have a ton of options in that regard, so they could go Chun-Li, they could go any other character in the entire history. They have the option to do movies all over the world.

Do you have a preference?