How Syfy's Riverworld is a new retelling of a great story

Philip José Farmer's classic Riverworld series of novels is about to get the Syfy "event" treatment this Sunday in a new four-hour movie, but you're going to get some re-imagining along the way—especially when it comes to the characters.

"Our Riverworld is largely based on the first two books [in Farmer's series], although it is an amalgam of bits and pieces of all of them," says executive producer Matthew O'Connor. (Spoilers ahead!)

The first two books, the Hugo Award-winning To Your Scattered Bodies Go and the sequel, The Fabulous Riverboat, where published in 1971 and led to three more novels. The series followed what happens when every human who ever lived and died on Earth wakes up scattered along a seemingly endless river.

"I think it's just such an interesting concept, and it has so many fans," said O'Connor. "There's even been some talk about the potential for a series, you know, because there is so much rich material."

One of the big differences for book fans will be that the hero of the books—real-life explorer Sir Richard Francis Burton, who died in 1890—is now the bad guy. While we can envision those who cherished the books about to ram their keyboards through their monitors at the thought, there is some good news. The new version has a good sci-fi pedigree, starting with writer Robert Hewitt Wolfe (Star Trek: Deep Space Nine, Andromeda, The 4400, The Dresden Files), director Stuart Gillard (The Outer Limits) and a genre cast that includes Tahmoh Penikett (Battlestar Galactica, Dollhouse), Laura Vandervoort (V, Smallville), Peter Wingfield (Highlander) and Alan Cumming (X-Men 2).

Riverworld follows what happens when a war correspondent, Matt (Penikett), and his fiancee, Jessie (Vandervoort), are killed by a suicide bomber. Matt and Jessie are "reborn" along a massive river, but the two find themselves in different places on the river, said O'Connor.

"They meet different people from all different times who gradually tell them the bits and pieces of information that help them understand what Riverworld is," he adds. "They have supporters from that world that guide them. Our main character, ... he meets Richard Burton [Wingfield], who turns out to be somebody who really doesn't believe in Riverworld and feels that it should be destroyed. It's just an abomination."

"And that's essentially the story, the journey of these two men and their search to find the source and either destroy the world or continue it," O'Connor said. "Matt continues his search for his love, and [it] turns out that she's also met Burton. People are reborn at different times, and the time/space along the river is not continuous, so some people have been there longer than others. It has quite a thrilling ending, atop the dark tower."

While some Syfy watchers may remember the 2003 Riverworld movie, which starred Brad Johnson and did its own share of re-imagining, O'Connor said the feeling was that it was time to "give it another spin" with a different take on the material. 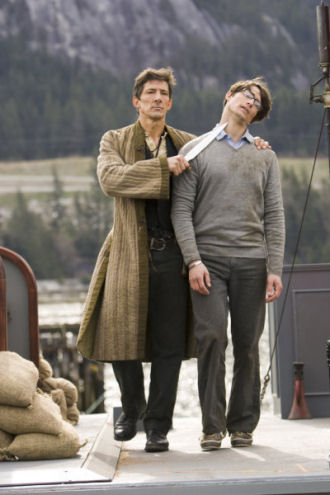 O'Connor thinks the fans will like the spin they've given the story, with Burton becoming the bad guy, and he promises Riverworld is faithful to the "core" of the books.

"At the core of the material is how do different people from different times with different thought process come together and interact, and what does that bring to each one of their characters as they go throughout the journey? That's the thing that really intrigued me, and I think it comes together well in our show," said O'Connor.

One little detail they are not faithful to, however, is how everyone wakes up along the river. In Farmer's books they wake up naked, and that presented a problem when it came to TV.

"Well, that's an interesting question that we really wrestled with. They have a little strategically placed cloth placed over their naughty bits," O'Connor said with a laugh. "Because we couldn't really do that, and you can obviously cheat, but then it looks like what it is. So we have a slightly different spin on that."

Riverworld premieres on Syfy on Sunday at 7 p.m. ET/PT and will air in one four-hour block.