For a good long while, there has been talk of a feature film based on Wendy and Richard Pini's Elfquest comics, which they've self-published since the '70s. Warner Bros announced it was making one back in 2008. Four years later, it's deader than Denethor. And you can blame Peter Jackson.

Well, sort of. See, Warner Bros. feels that three films with elves is one too many and, with the sure-to-be-a-massive-hit-twofer The Hobbit coming this December, they pulled the plug on Elfquest. Or, at least, that's how Wendy Pini put it on the official Elfquest Facebook page:

"After close to four years of suspense—and longer than four years of your much-appreciated interest and support—the word has come down from Warner Bros. And the word is 'no.' Their simple explanation is that they don't want to compete with The Hobbit. This was a possibility, among several, that we were prepared for. It is a relief, at last, to know."

Then, Ms. Pini posted the following slightly puzzling image as a response to the news: 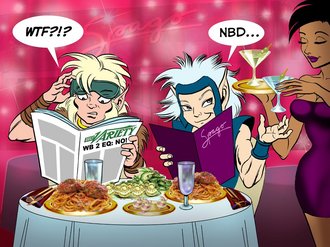 Is The Hobbit truly to blame, or is it simply an unassailable scapegoat to cover for a studio that simply lost interest? No way to know for sure. I guess Elfquest: Fan Imagining is as close as fans are going to get: