How the Riverworld movie event will meander from the books

Robert Hewitt Wolfe, who wrote the upcoming SCI FI Channel four-hour movie event Riverworld, told SCI FI Wire that the film—based on Philip Jose Farmer's series of books—similarly deals with life and how we live in the face of death, but changes the details.

"What I love about the books are they are basically about what happens after we die, and, more to the point, how do we live our lives in the face of death, and what does life mean?" Wolfe (Andromeda) said in an exclusive interview. "The other great thing about the books is the way it throws together people from all over history. It has the famous and not-so-famous from different periods meeting each other. I always found that to be a real exciting concept."

The movie stars Tahmoh Penikett (Dollhouse) as Matt Ellman, an American war zone reporter who has witnessed the worst of humanity firsthand and yet still grasps on to an optimistic spirit. When a suicide bomber kills both Matt and his fiancee, Jessie (Smallville's Laura Vandervoort), they awaken separated in a mysterious world where everyone who has ever lived on Earth seems to have been "reborn" along the banks of a seemingly endless river.

Following is an edited version of our interview with Wolfe. Riverworld is slated to air in 2010.

Riverworld sounds very spiritual. How would you describe this world or plane of existence they are on?

Wolfe: The basic premise for Farmer's books are everyone who ever lived and died wakes up perfectly healthy in their 20s or 30s on the banks of a million-mile-long river. What is the implication of that? Obviously, there's some kind of intelligence that has done this to everyone, but, by extension, it asks those basic questions about why are we here? Why do we exist? What's the point of life? One of the things I tried to do in the adaptation was create very specific points of view on those central questions that we have confronted in the real world. Our characters continue to confront those questions in this very strange world.

Can you introduce us to Matt and the journey he is on?

Wolfe: Matt is basically a guy who has seen a lot of violence in our world. He's like Anderson Cooper when he was 30 years old, running around the world and dodging bullets. Matt is a war reporter who has seen some really bad things. As he is coming off a particularly bad incident, he meets Jessie, who is a beacon of light to him. She restores his faith in humanity. And then they both die. When Matt comes back to life on the Riverworld, she's not there. A lot of people that died when he did are around him, but he cannot find her, so that is his initial quest. 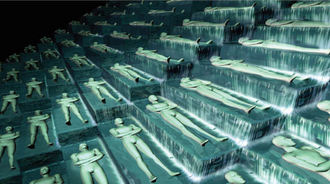 In what ways did adapting The Dresden Files from book to television prepare you for Riverworld?

Wolfe: It's interesting, because the process of adapting Riverworld was so long. Hans Beimler and I actually did a draft of Riverworld as a one-hour movie for SCI FI about five years ago, so that's how we landed the Dresden Files job. After Dresden Files was done, Riverworld was back alive again, so they brought it back to me. In a weird way, it was the other way around: Doing Riverworld helped me in my understanding of doing Dresden Files. And SCI FI had some very specific ideas. They wanted a viewpoint character that was an American, which isn't in the books. Once you start with these marching orders, you pick and choose the things in the book you love and try to keep as much as you can. Hopefully the spiritual and philosophical nature of the Riverworld books will come through in the miniseries.

Were there other details that required tweaking?

Wolfe: With Riverworld, they wanted the riverboat to be there right away, and an American viewpoint character who has a very understandable and human quest, which is the search for love. When you come from that point of view, a lot of what's in the book has to fall away, because we're not following Burton. He's a character in the miniseries, but he's not a viewpoint character like he was in the first Riverworld book. Nor are we following Sam Clemens, who is also a character in the miniseries but isn't a point-of-view character like in the second Riverworld book. If you're coming at it from that angle, what was important to preserve was the spirituality, philosophy, this sense of wonder of meeting these historic figures and the humanizing of them so you understand even Sam Clemens has bad days and gets cranky.

Who are some of the familiar faces Matt bumps into?

Wolfe: Obviously, I already said he meets Sam Clemens, who has managed to get himself a riverboat built by hook or by crook. Mark Twain was so much fun to write. His voice is so unique. It's there, and you can read it in endless essays. He's just one of the great voices in American history, and a total pleasure to write. We have Sir Richard Francis Burton—not the actor, but the British explorer and adventurer who was the point of view character in the first book. In our adaptation, he's more of an antagonist, which, if you've read anything about Burton, isn't too much of a stretch. ...

There are other Riverworld novels as well. Have you thought about what you'd like to explore if there are further installments?

Wolfe: If this was to go to series, the show is philosophical. Why are we here? What is the point of existence? How do we affect the world? How do we deal with the idea of God? What happens to us after we die? All these characters are still struggling in this pseudo-afterlife they've ended up in. There's the mythological aspect of who built it—and why? What's the point of this place? Is it good or bad? Is it a positive, or is this place some giant rat maze? I'd love to explore those themes, and with Matt trying to make a difference by improving the situation of everyone around him.

Then there is the fun of meeting all these different historical figures. There was a brief moment when there was a battle between fighter pilots using gliders and Roman legions firing catapults at them. That's cool. I'd love to do a story where the real Macbeth finds out about this play that has been written about him and is freaking pissed off because it makes him look like a dick! And the historical Macbeth was a pretty good guy, so to see this play that paints him as this murderous madman is interesting.