The stars of NBC's The Storm weathered disaster

A storm's a-brewing—the mother of all storms, in fact—and the world is soon to end. What would you do?

Well, James Van Der Beek and David James Elliott—who star together along with Treat Williams in the upcoming NBC miniseries The Storm—have an idea of what they'd do on doomsday.

"I've been through quite a few hurricanes," Van Der Beek said in a conference call Monday with reporters. "I worked in North Carolina, where there's a housing development whose name was Landfall. And so, yes, in situations like that I think I tend to get pretty calm and pretty level-headed, which I think is probably the best way to get. But you never know. It's one of those things you never know until you're in it just how you're going to react. So hopefully ... "

Elliott—on the call with Van Der Beek—interrupted, saying, "That is what they say."

Elliott added, "I'd like to think that I would do the right thing."

Set to premiere at 9 p.m. ET/PT this Sunday and conclude at the same time the following Sunday, The Storm spans four hours and explores what happens when the test run of billionaire Robert Terrell's (Williams) so-called "weather creation" project goes awry. An energy blast enters the ionosphere, causing winds to switch from hot to cold and hurricanes to change course. Then there are the torrential rains and the explosive lightning storms. And that's all just for starters.

Meanwhile, other figures enter the picture. Van Der Beek plays Kirk Hafner, a scientist determined to stop Terrell before it's too late, while Elliott is U.S. Army Gen. Braxton, who sees in Terrell's technology a powerful weapon. Teri Polo plays a news reporter Hafner contacts in order to get the word out about what's really going on. Additional cast members include John Larroquette, Luke Perry and Marisol Nichols.

Van Der Beek explained that he was intrigued by the Hafner character, who gets his chance to realize his own dreams—on someone else's dime—only to be taken advantage of. 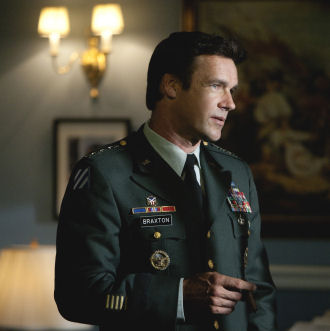 "I was fascinated by the idea of a scientist who's kind of in love with the exploration and follows his knowledge as far as he can, but then all of the sudden creates something that somebody else can use, and for nefarious purposes," Van Der Beek said. "This guy created this technology with the best of intentions, and then somebody else took it and is using it for their own power. And so it puts him in a difficult situation. It's a guy trying to do the right thing when the right thing isn't entirely clear."

Elliott, meanwhile, appreciated the challenges inherent in his character.

"I'm awfully young for the role," Elliott said. "However, we decided that he was a brilliant military mind, and he rose through the ranks at lightning speed. And as the film kind of supports, he may have got there just a little too soon. Every role is challenging [and the challenge is] bringing nuance and levels to the character, keeping it truthful and interesting. He was a military man, and I've certainly played one of those [on the long-running series JAG], but there were definite differences. And he had to struggle with his morality, ultimately."

Finally, Van Der Beek faced another challenge, one of a physical nature: rain. Lots and lots and lots of rain.

"I tell you, the rain was real," Van Der Beek said. "There was no green-screen rain in this thing. ... We really didn't have too many green-screen issues at all. A lot of [the effects] were practical and right there, everything from the lightning flashes to the wind and even explosions were all [real]. ... If they were in frame with me, they were there on the day. So it was a pretty real environment. I didn't have to use too much imagination for a lot of it."