How the Trek: Next Generation cast beams into Family Guy

Family Guy executive producer and show runner David A. Goodman told reporters that the entire cast of Star Trek: The Next Generation were game to let themselves be spoofed for this weekend's episode of Fox's long-running animated series.

The regular TNG cast—Patrick Stewart, Marina Sirtis, Jonathan Frakes, Gates McFadden, LeVar Burton, Brent Spiner, Wil Wheaton and Denise Crosby—play themselves in "Not All Dogs Go to Heaven," which finds Stewie building a transporter and beaming the actors into his room after he doesn't get to ask a question of them at the annual Quahog Star Trek convention.

Goodman, who was a writer and producer on Star Trek: Enterprise, spoke about the episode—as well as the next Star Wars-themed movie—during a conference call on Tuesday. Following are edited excerpts from that conversation. "Not All Dogs Go to Heaven" will premiere at 9 p.m. ET/PT on Sunday.

What would you say is your favorite scene from the episode?

Goodman: Well, that's interesting. I think my favorite scene is the one that I'm in. I'm a huge Star Trek fan, so the artists drew a version of me, and then I voiced the character dressed as a Star Trek ... some might say fan, some might say geek, asking a question at the convention. And then I have a little bit of a run-in later with Patrick Stewart and Jonathan Frakes. So that's probably my favorite scene.

What do you think is the best line of dialogue in the episode?

Goodman: Best line of dialogue? ... To me, the best line of dialogue is what Stewie says to the cast at the end of the episode. I'm not going to give it away, but his attitude toward the cast ... [Stewie] didn't get to ask his question at the Star Trek convention, so he kidnaps all of them and he has a little bit of a journey with them, and his final words to them, I think, are very funny, but I'm not going to give it away.

Why do an episode with the Next Generation cast now? Is it a tie-in of any kind to the new film?

Goodman: No, that's not the intention. You could have asked, last week, why did we do a Back to the Future reference when the movies are so old. We're fans. Especially Seth [MacFarlane] and I are huge fans of Star Trek, and we realized that although there had been plenty of episodes of episodic television that brought back the cast of the original series—in fact, I wrote one of them for Futurama, "Where No Fan Has Gone Before," where we reunited the original cast—Seth and I realized that nobody had really reunited the Next Generation cast. And many of them had appeared on our show. Next Generation was a hugely popular show in its day. I think they got, like, 10 or 12 million viewers a week. We only get, like, 8 [million]. It was a popular show. We're not necessarily going to reference the most current show, although we do that, [but] our stock in trade is our own memories of those shows we watched when we were younger.

You did the Star Wars movie, Blue Harvest. Now there's this Star Trek episode. How about a Terminator spoof?

Goodman: We've done occasional Terminator gags. We've got one, I think, coming up. But our big movie things coming up, we did The Empire Strikes Back, and Return of the Jedi has just gone into production. So we're doing all three of the Star Wars films. And then we occasionally do movie parodies within the course of an episode. We have an episode that's very reminiscent of Tootsie that's coming up next year. But, no, no plans at the moment to do The Terminator.

The episode is titled "Not All Dogs Go to Heaven." What does Brian have to do in the episode?

Goodman: There's two stories going on in the episode. One story follows Meg and Brian. Meg finds God, and she finds religion and is giving Brian a hard time for his atheism. So that's one story, and when we developed that story we saw that Stewie didn't have a big role to play. So we then also developed a story to go with it, and the two stories tie together in the beginning, when the family goes to the Star Trek convention and Stewie doesn't get to ask his question. So he buys plans for a transporter and beams the cast into his room. But the other story is Meg and Brian, and it's them butting heads over religion. It's a subject we've done before in different ways, but this one has a new twist on it. We were struck by the fact that in America atheism is considered worse, by some people, than Muslim extremism. That was an interesting subject for us, we've thought. And we've always said Brian is an atheist, so he seemed the natural [character]. 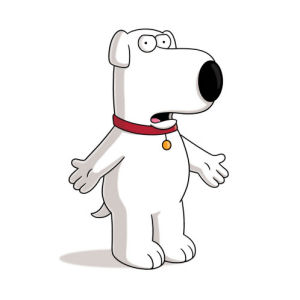 Can you talk about the Next Generation actors playing themselves?

Goodman: They were all very game. We had fun playing with who they really are. Stewie discovers what it's like to hang out with them. It's a Family Guy twist on your expectations. So I'm very pleased with the surprises in the episode, in terms of the journey that Stewie takes with these people.

Did the actors come in all at once, or did they record their dialogue separately?

Goodman: Just given people's schedules and given how animation works, you almost never have people in at the same time. I think people were in on the same day. A few of them were in on the same day, but their schedules were scattered, and so we were amenable to working around their schedules. Most of them came in separately, but I think Gates McFadden and Denise Crosby came in around the same time, and I got some pictures taken with them. I think, actually, we recorded Patrick Stewart remotely. He was in London when he recorded his role. ...

What's the update on Star Wars?

Goodman: I think, but I'm not absolutely sure, that Empire Strikes Back, that episode will air at the end of next season. It may be released before then [on DVD], but it'll air at the end of next season. That movie was a very different movie from the first Star Wars, so as a result our sequel is also a lot different, a lot of new characters, and a lot of great jokes that we threw in. We were very happy with how the first one turned out, so the bar was very high for the sequel. We're a little bit early for the third one, but because we're very happy with how Empire has turned out, the third one also, the bar is set even that much higher. And I think we're ripe to disappoint people. ...

Back to Star Trek. As a Trekkie, were there any jokes or issues you felt you just had to get in there? Like a Tasha Yar joke? Or a Geordi joke?

Goodman: Well, there is a Tasha Yar joke in the episode. It's pretty obvious from the minute she opens her mouth. Denise was very game about it, and anybody who is familiar with the series will get it right away. Anybody who is not, it just plays as a joke on its own. For me, the second scene that my character is [in] I am pontificating about a piece of Star Trek [canon]. I'm having an argument with another Star Trek fan about what they call Star Trek canon, and the argument is actually a real argument that Star Trek fans have. So I was very pleased to put that in.

Can you tell us what the argument is?

Goodman: Yes! I'm going to sound like a real Star Trek fan. In the episode "Relics," in Star Trek: The Next Generation, the character of Scotty is pulled out of suspended animation, and he says, "Oh, did Captain Kirk come to pick me up?" And then we find out after The Next Generation ended that Captain Kirk died and Scotty was there. So why, in that episode, did he think Captain Kirk was going to pick him up if he saw him die later? And, of course, the answer is that, from a production standpoint, they hadn't made the movie yet and made that decision. But there is actually a possible explanation which I offer in the guise of a cartoon character. So I was very pleased to do it. Does that make any sense to you at all?