How weird is True Blood going to get this season? A preview

Think True Blood is getting weird with that teenage vampire "intern" or the underground cells? It's only going to get weirder, according to Carrie Preston, who plays Arlene Fowler on the show. Explicit violence and nudity are nothing compared to what's in store for season two.

"It gets more bizarre," Preston said in an exclusive interview last week in Burbank, Calif., where she represented the show for its Saturn Award nomination (it didn't win). "Like, truly dark and bizarre. It was pretty explicit last year, but I guess they have to go somewhere from last season."

So far in the first two episodes of the season, Sookie Stackhouse (Anna Paquin) is trying to make peace with Bill's (Stephen Moyer) commitment to the new vamplette, and Jason (Ryan Kwanten) is trying religious abstinence camp. Preston told fans to expect even bigger surprises.

As for Arlene's crazy character shifts, "You'll just have to wait and see. Let's just say there are some things that are beyond her control." 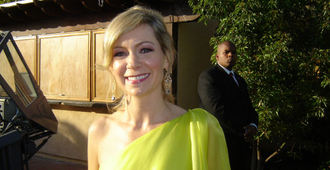 Carrie Preston at the Saturn Awards

True Blood debuted last year and became HBO's newest hit. Based on the novels by Charlaine Harris, the series began with the conflict of a telepathic girl trying to date a vampire in a world where synthetic blood permits "safe" interactions between vampires and humans. After developing all its supporting characters and story arcs, Preston said that work on season two has felt as though it is on a surer footing.

Evan Rachel Wood joins the cast at the end of the season as the lesbian vampire queen of Louisiana. Arlene will not get to encounter Wood just yet. "Mm-mm, I don't have any scenes with her, so I haven't met her, but she's shooting right now. We're shooting the final episode right now."